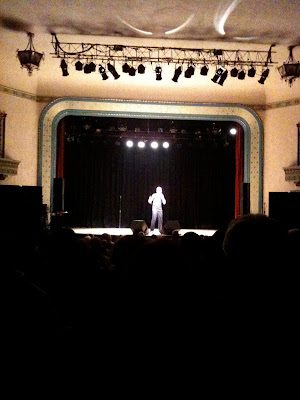 Great picture, huh? Well, at least you can tell I had a solid view. I think I was one of maybe five people who didn't have somebody sitting in front of them. I lucked out. The place was packed. But I'm getting ahead of myself.

Through my sweet job, I was able to get the wife and I two free tickets to see Henry Rollins do his spoken word thingy on Saturday night. I saw Rollins Band play the Roseland back in in '97 (my friends and I taped their performance of "Starve" on SNL and became obsessed with it - we had to go), but I had never seen him speak in person. I used to watch his Talking from the Box VHS when I was a teenager and I have a few cassettes of his spoken word stuff (great for road trips), but I never took the plunge to see it in the flesh. I'm glad I did.

Before we got there, I was wondering out loud to my wife if he was going to say anything about the recent passing of Ronnie James Dio and Dennis Hopper. As we walked in and Dio was playing over the theatre speakers, I became fairly certain he'd be touching on Ronnie James, at least. (Rollins has always been an proud fan of Dio, so that's sort of why I was expecting it.) He said a little bit about Dio and explained that the music was a mix CD he had made of Dio's music. He then told a little story about Dennis Hopper and said a few nice things about him. A cool move, I thought.

Then he dove into his material, and once he got going, he didn't stop. Apparently he had me locked in, because he spoke for almost three hours and it felt like about one. Trying to go over all the stuff he talked about wouldn't do it justice, but needless to say, it was awesome. I didn't see him take a drink of water until the whole thing was done. Yes, he remains a lunatic, the only guy who can make a spoken word engagement an intense endurance ritual for himself. And I loved every minute of it.

I'm definitely seeing him the next time he's in town, even if I have to pay for it. Certainly a unique experience, and a good one for us aging rockers who like to sit down for their entertainment.
Posted by Wockenfuss at 10:39 PM