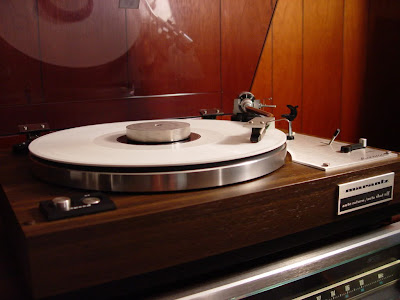 This is not a picture of my actual turntable, but this is the same turntable that I have. I've owned it for years, but for much of that time it's been in semi-working condition and I haven't been using it. The left channel would always cut out, and it made listening to my LPs an exercise in frustration. I finally got it back from the repair shop after a lengthy stay there (think I might have mentioned this before), and it sounds better than ever.

Not sure why I'm mentioning this. Guess I'm just excited about it. It's definitely given me a reinvigorated interest in playing my records, and that's not a bad thing. For anyone interested, it's a Marantz 6100. Fully automatic, and really nice looking. I'm happy. So that's that.

The past and current numbers breakdown, as it relates to CDs vs. vinyl:

As you may know, because I've mentioned here a few times, I'm always in the process of replacing my CDs with vinyl copies of the same album. I then sell the CD versions and put the profits towards either more records, or - currently - seasons of The Sopranos. So, not only have I been buying new records, but I've been losing some of my compact discs. I spent some time and went back and changed the posts where I now have the LP copy of something that I had the CD version of when I originally posted. The numbers are up to date.

And for the first time since I started writing this blog, LPs have overtaken CDs.

Possibly most impressive: I've made 600 posts. Yikes. And we're just starting out on the P's. Still a long way to go.
Posted by Wockenfuss at 12:53 AM