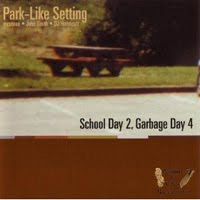 Man, it's been a decade since this album dropped? Craziness.

Park-Like Setting is one of the earlier offshoot groups from mcenroe's Peanuts & Corn label, and in their first incarnation it featured mcenroe, John Smith, and DJ Hunnicutt. My brother discovered mcenroe through his Ethics EP, when it showed up used at the record store he worked at. He liked it, and soon, he was a fan of everything the P&C label released. It took me a little while, but I eventually got into their music, too.

This album was one of the first ones I really attempted to wrap my head around, and it was a great place to start. It's framed a concept record, and while it loosely is, there's no need to get wrapped up in that aspect of it. (Though the song titles make it a little bit difficult not to.) This is simply some great turn-of-the-century indie Canadian hip hop, and though all the members of the group have progressed greatly in their skills since this point, it's still dope as all get out. A young John Smith ready to take over the world; mcenroe trying his best to make sure the drums hit as hard as possible (those snares are rugged); DJ Hunnicutt sampling shit that nicely reflects his solid taste in hip hop: there's no reason not to like this.

My brother made me a tape of this when he had it, but I always felt guilty about not buying my own. This is as indie as hip hop gets, and I know how that goes. I got the chance to buy a copy from the man himself when my brother and I went to see mcenroe and Pip Skid in Portland many years ago. He was nice enough to sign it for me, and I still have it. He wrote, "Keep it rilly rill." And I did.

Seriously though, if you're not listening to the artists on Peanuts & Corn, you're missing out on some great music. Check out a few other ones I wrote up here and here.

And if you know this CD at all, you've got to check out John Smith's blog about it from a few years back.

You can listen to some samples here, but that's the best I can find, apparently.
Posted by Wockenfuss at 12:46 AM

Wow. This album blew me away when I first got it. It will always remind me of riding the bus to PSU my first year in Portland, straight up rocking the discman. This was my official introduction to John Smith (I was already a Mcenroe fan) and he knocks it out of the park. I think he is around 21 on this which makes it even more impressive (and a lot less thuggish). This is truly an album as it has something like 24 songs and is 74 minutes long with no filler. My choice tunes were always "Music Appreciation," "Philosophy," "Personal Development I," "Social Studies," and "Extracurricular Activities II." That being said, pretty much every song on here is golden.

I recently read an article where Mcenroe said that they never considered it a concept record until after it was done. The song titles were just a clever afterthought, which really bums me out because for years I thought it was a simply genius idea. It's still a genius record.