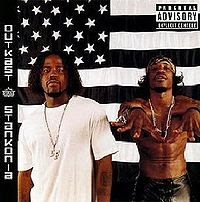 I had a friend who asked me for a hip hop recommendation during the summer of 2000, and I of course suggested Aquemini to him. He dug the shit out of it, and about a month before Stankonia came out, my brother, through his record store job, hooked me up with a six-song promo sampler of the upcoming record, along with a collection of Outkast videos that was designed to be played in the store. It had "B.O.B." on it like six times, with other Outkast videos in between. We listened to the disc, watched the video, and got crazy excited for the release of the new record.

"B.O.B." is, if you had to pick one, probably Outkast's best song. Again, they came up with something that knocked everybody flat. And nobody could have seen the force that it unleashed coming. If you ever needed a single to get people revved up about your newest release, that was it. The wild snare hits, the fast-as-shit tempo, the raps from both (the newly minted) André 3000 and Big Boi that somehow sounded thrown-together and classic at the same time ("Yo quiero Taco Bell"?) - it was all too good. And the video was just as nuts.

And the whole album ended up being almost as powerful. While the duo got a little interlude-happy this time around, even that couldn't fuck up the flow of this monumental record. I was initially shocked that they didn't lead the damn thing off with "B.O.B.," but then remembered that sequencing was never their strong suit. Still, that track should have busted in after the intro. Seemed like a no-brainer to me. But, as usual, they kicked things off with the weird one. This time around it was the awesomely titled "Gasoline Dreams," which, while dope in its own regard, still feels like the lead-in to the instantly-stuck-in-your-head-forever "So Fresh, So Clean." They must have known when they wrote the hook to that song that it was going to be huge.

And they must have felt the same way about "Ms. Jackson." That was one of the songs on the sampler CD that I had before the album came out, and I was already preparing for the song to be a hit. When the video came out, I knew it was a done deal. Still a great clip. Still a great song, though I've possibly heard it a few too many times.

We played the shit out of this CD at every party during that winter and on into the summer. And everybody loved it. Or at least that's how I remember it. The singles were obvious favorites, but "I'll Call Before I Come," "We Luv Deez Hoez," and "Humble Mumble" were also favorites. The thing is, there were also a lot of tracks that didn't get played. Part of that's because they just weren't "party songs," but there was also an underlying inconsistency to this record that seemed to also reflect the current state of the group.

You'll notice that André is conspicuously absent from "Snappin' & Trappin'" and "We Luv Deez Hoez," and though he shows up on "Gangsta Shit," he manages to slip in a line about walking in the park with his guitar. Even when he says "Outkast wit a K, yeah them niggas are hard," it sounds like he's fucking with us. All three of these tracks fall under the umbrella of being a bit more ruthless (and a little less inventive) than the other cuts on the album, and you can't help but wonder if André was trying to distance himself from some of those things.

And his spaced-out shit was getting even more spacey. "Stankonia (Stank Love)" remains one of the most odd Outkast tracks out there, and it's clearly André's deal. "Toilet Tisha" is, along with the aforementioned cut, towards the end of the album, and though the concept is cool, it just doesn't quite work. It's not that this record fizzles out at the end, but it almost feels like it's going to.

Still a great record, and maybe the last true group effort we'll see from these guys. I just picked this bad boy up on orange vinyl, and it is sweet. And I love that this record will always remind me of assing out at dance parties. Precious memories.

You know, I had been hoping that "Aquemini" would make me LOVE Outkast. It didn't. But "Stankonia" did. I won't say much about it because what can you say. "Ms. Jackson," "So Fresh, So Clean," "We Love Deez Hoez," and "Xplosion" are all brilliant songs. Every time I hear "B.O.B" I can't believe how great it is. And it's one of the rare times (for me anyways) that Dre really outshines Big Boi on the mic. Dre's rap on "B.O.B." makes me want to cry, it is so good. Speaking of Big Boi, have I mentioned that he might possibly be the best rapper on the planet? I probably will on the next album.

Also, have I mentioned that I don't really get into the slow jams that seem to pepper the end of their albums? I appreciate it. I don't enjoy it. They really kill the momentum for me.

Oh, and the "B.O.B." video where Dre raps while he is running is incredible.