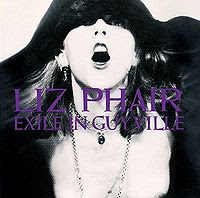 Oh, if only we could have frozen Liz Phair in 1993. She was perfect. Exile in Guyville is such a stupidly good record that it's amazing it even exists. I fear that her semi-recent idiocy has forever tarnished her standing with some of the folks who held this record so dear, but it still deserves to be discussed when you're talking about the most important records of the 90's.

And the thing is, people wouldn't be so damn pissy about Liz Phair "selling out" if she hadn't meant so much to people in the first place. It wasn't only the incredibly personal shine of the songs on Exile (though there is plenty of that) - it was Phair herself. She famously started out recording little handmade cassettes of her Girly Sound project, fell in with the Chicago indie-rock glitterati (Nash Kato, anyone?), and scored a record deal without even having to meet the Matador people. She was frail, stricken with crippling stagefright, and just vulnerable as all get-out. She could also write a melody that would get stuck in your head for a year. It's no wonder every girl in the world wanted to be her, and teenage boys like me wanted to have a hard makeout session with her.

Spin dubbed Exile in Guyville Album of the Year for 1993, but I think I had purchased it even before that. They had hyped it so much that I just had to see what the deal was. It was not what I was expecting. It was way better than what I was expecting. Phair's voice was shaky and took some initial getting used to, but once you got past that, it was just a matter of realizing that every damn song on this thing is good. I am, for whatever reason, not a person that listens to a lot of female artists, but this one hit me in a way that no other had or has since. And I'm still not sure why that is. Every girl I knew around the time this came out immediately adopted it as their go-to album, and that didn't surprise me. The fact that a track like "Divorce Song" brought up actual emotion in me - and still does - was something I have little explanation for.

And I'm not sure I care how or why this album gets to me the way that it does. It just does, and it's the same way Sonic Youth's Goo gets to me or the Pixies' Surfer Rosa gets to me. It just makes me feel like I might vomit awesomeness. And very few records can do that.

If you think I'm laying it on a little thick, think again. This record is every bit as good as everyone says it is, and I'm one of those everyones. This record also, in every cheesy way you can imagine, takes me back to what I perceive to be a simpler time in my life, and does it in a big way. Again, not sure why this one in particular really reminds me of my senior year of high school (when I was listening to forty other tapes on the regular), but it's right up there with Doggystyle for memory-jogging. Quite a pair, huh?

This record seems to get remembered for "Fuck and Run" and "Flower" - the naughty songs! - and that's a shame. Because some of the deeper cuts - particularly "Explain it to Me" and "Shatter" - are just as vital to the whole scheme of things. Man, those songs are sparse and huge at the same time - tough to do.

So forget about what Liz Phair's doing now. And forget about her claim that this is a song-for-song answer to Exile on Main Street, because that idea barely holds water. Just listen to this record and like it. Because it is good. That's what I do, and it's been working out for me pretty well.

"Stratford-On-Guy"
Posted by Wockenfuss at 11:18 PM