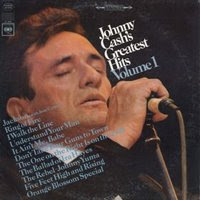 My father was in the Navy during the Vietnam War, and his aircraft carrier was stationed near various ports during his tour of duty. As he tells it, the crew was allowed the entire bottom floor of the ship to store any and all goods they could purchase while on shore leave in Hong Kong. Apparently stuff was dirt cheap there, as he picked up a huge cabinet stereo (complete with turntable and reel-to-reel player), a couple pairs of Pioneer headphones, and a large stack of records.

I wasn't born yet when all this happened, but a lot of these were the records I grew up with. They're very strange, printed on regular paper and loosely wrapped, inside and out, in a saran wrap type plastic. Here's one like it on eBay. At this point, I'm fairly confident these are nothing more than cheap bootlegs. I still have a few of 'em, this LP being one of the ones I held onto. It was released by ChungHwa Records, and while the recording doesn't sound too shaky, it's not great.

This is early Johnny Cash, some of his more basic country stuff. "I Walk The Line," "Ring of Fire," "Five Feet High and Rising." Classic Johnny Cash; not something I listen to all that often.

The thing that's great about these LPs from Hong Kong is they're rife with spelling errors. In their attempt to translate the English, it constantly got butchered. This one's not too bad (I've got some gems on some later records), but the label does show a few major flaws: the title is "Johnny Cach's Greatest Hit's" and track two is "I Walk the Lingt."

Wait till I get to one where they try to print the lyrics.

"Five Feet High and Rising"
Posted by Wockenfuss at 7:23 PM