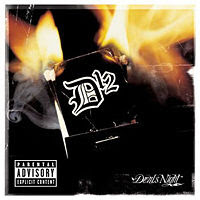 I had low expectations for this disc. So, when it ended up not completely sucking, I felt like I got my seven dollars worth, which is what I paid for it because I waited to find it used.

Here's the deal: Eminem is great. I could explain why I like him, but I'll get to that when we get to the E's. For these purposes, just know this (or at least that I think this): dude's as good a rapper and lyricist as there is out there, especially for the kind of music he makes. It has wide appeal - it's dumb enough for the dummies, while being smart and multifaceted enough for the smarties. Tough to do. Anyway, he's good. Here's the rub: when you put him on the same song with dudes who are good, actually not bad at all, but not great, they sound worse than they really are. When you put him on the same track with somebody who's terrible, they sound like a contest winner who's lucky to be anywhere near the studio.

So, these are the obstacles that D12 face. Eminem owns every track he's on, if not just because he's the best rapper, but because his voice stands out and his delivery always packs in more syllables and backups. But, he works his way onto a lot of songs without completely overshadowing the other guys. Proof, when he's not assuming some growly voice, is a great rapper. And Swifty, Kon Artis, and Kuniva can hold their own pretty easy.

Then there's Bizarre. I can say, without hyperbole, that Bizarre is the worst rapper I have ever heard on a major label rap release. I don't even want to get started, because I could go on forever. He literally can't rap. It's that bad. The idea was that he was the "crazy" one in the group, but all the other dudes are just as "crazy," so all he really is is the one with the tits. Wow, I can't stand him.

So, there are some songs on this one that I avoid at all costs because he's on 'em. And there are some that just maybe shouldn't have made the cut. The record's too long, and once it pushes towards the hour mark, it drags. "Purple Pills" is pretty lame, "Pimp Like Me" is as lame as it sounds, and so is "Nasty Mind." But, "Shit Can Happen" and "Pistol Pistol" are a good kind of juvenile fun, and there's a few more that share the same appeal.

"Fight Music"
Posted by Wockenfuss at 1:16 AM