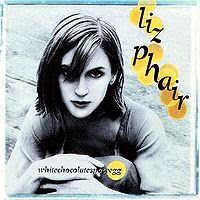 I could have sworn I owned a copy of Whip-Smart on CD, but it's nowhere to be found. So, apparently we'll be skipping Liz Phair's awkward sophomore LP and moving on to her I'm-all-grown-up-now one.

whitechocolatespaceegg, once you set aside its dumb title (it came to her in a dream!) is a solid little record. It was released only five years after Exile in Guyville, so it's not completely removed from that era yet, but it's got one foot out the door. Tracks like "Polyester Bride" and "What Makes You Happy" tread dangerously close to Sheryl Crow territory, but they don't step quite that far. Which is good.

And though I haven't listened to this album in ages, I do remember liking it quite a bit when it came out. In fact, the one time I saw Liz Phair live was when she was touring on this record. It was at La Luna here in Portland and it was crazy packed with hardcore Phair devotees. This asshole in front of me and the girl I was with felt the need to scream every single lyric to every song while drunkenly slobbering all over himself and it drove me fucking nuts. Some other asshole also got a "Fuck and Run! Fuck and Run!" chant going that made me sad for humanity. But, otherwise it was a pretty great show. (Note to shitty concertgoers: People still remember how you ruined the show for them over a decade later. Get your shit together.)

Anyway, this is the last good Liz Phair album before she disappeared for five years and reappeared as a completely different artist. And coupled with her first two, it makes for a nice trilogy.

I actually got a copy of Liz Phair's 2003 self-titled CD from a friend when it came out, and I really gave it a go. I just couldn't do it. And I'll leave it at that, because the rest of the world has already said way too much about how shitty it is. Stick with her first three records. Whip-Smart, while no Exile, is a really good album. Wish I could find my copy...

"Polyester Bride"
Posted by Wockenfuss at 12:10 AM