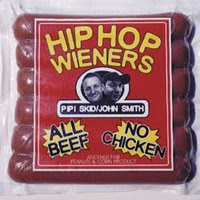 Without delving too deep into the history of John Smith and Pipi Skid, I'll just say that when my brother and I heard the pair was teaming up for an album, we were excited. When we heard they were calling themselves Hip Hop Wieners, our anticipation levels reached a boiling point. Thankfully, the two Canadian MCs did not disappoint.

All Beef, No Chicken is one of my favorite independent hip hop albums of the aughties, a wordfest that has gone sorely unrecognized (as far as I know; maybe they're huge up North). It's a damn shame, because I feel like if folks knew what these two dudes had to offer, they might become lifelong fans. Peanuts & Corn (their label) consistently churns out quality hip hop (see Break Bread), keeping the family tight and the rhymes tighter. This album feels like a lifetime of rapping reaching its peak, with two rappers with distinct styles playing off each other and creating some ultra-dope tracks.

"We 2 Rappers" is a brilliant leadoff cut, as well as a nice introduction to both of the rappers. The beat is rough with the drums but delicate with the music, and it works well in backing up both dudes. And Pipi declaring "I'm too old for rap" and Smitty saying "You rhyme shit with shit? I ain't your homie" are both highlights.

Things just get hotter from there. "Hard Rimes" is pure dopeness, a song that mixes up tempos and gets the dudes into spitfire mode. "Brains and Brawn" has a smooth little bounce to it, and features Smith sounding as pissed as ever. "Studio Time" gets the P&C posse together and packs a gang of raps into an almost six-minute song. "Ain't That Hard to Bite" and "Audio Cassette" make for a nice little combo towards the end, with each song being under three minutes.

The bravely titled "Suge Knight" is the penultimate and longest cut on the disc, and features a "Fuck you, pay me" hook that seems out of place but is pretty damn fun to listen to. For some reason, when these guys flex tough, it works. I wish I knew how they did that.

I could go on, but I ain't gonna. If you're looking for some new hip hop, you should really check this out. It's guaranteed to please.

Looks like you can listen to some samples here.
Posted by Wockenfuss at 1:51 AM

Forgive me, I am behind. This is one of my favorite hip-hop albums of all-time. For me, it is that good. Pip Skid and John Smith, two of the world's most overlooked emcees, were at the top of their games on this one. Mcenroe brings a perfect collection of beats for their styles and a classic is made. Keeping up with the P&C group release theme, only about 2/3 of the album features the group while the remaining tunes are solo. John Smith really steals the show as his solo "Brains & Brawn" and "Hip Hop Sloth I" are simply incredible. "We 2 Rappers" is monumental. "Asleep At The Wheel" with Gruf has always been one of my favorites here, capturing the poor lonely 20s perfectly. "Suge Knight" is hilarious and Mcenroe somehow comes up with the best verse. And how can you forget "Run And Hide," their ode to crunk featuring one of Smith's all time best raps. I could go on and on. Seriously though, I think I have bought this album for at least 2 people.