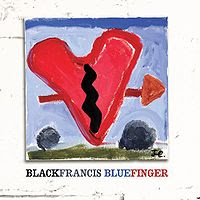 I wasn't sure what to think when I heard Frank Black was going to release an album under the name Black Francis, which he hadn't used in over 15 years. I got the feeling that the name change was intended to keep the excitement over the Pixies revival going, but it didn't seem to matter much. Bluefinger was released without a lot of hoopla, and the music it contained wasn't anything too out-of-left-field.

However, if there's one clear difference between the songs here and those released under the Frank Black name for the last few years, it's the rockin'. These are, for the most part, stripped-down and guitar-heavy songs that seems purposefully more abrasive than any of this other recent work. It's not exactly a return to the Pixies, but it does seem to be a record devoted to getting out some of the aggression that was put on hold during the recording of Honeycomb and Fast Man/Raider Man.

The songs are solid, and though they are often rowdy and ragged, they aren't without focus. They seem more deliberate and less loose than some of his recent "rock" efforts, with lyrical quirks to match. "Threshold Apprehension" is reminiscent of FB lyrics of old, and the opening riff on "Test Pilot Blues" sounds very Cult of Ray-era. I struggled to really embrace this album at first, but since its release, I've grown more and more fond of it.

"Lolita" starts like it could end up being a slamming rocker, but the chorus turns poppy, almost cheery, and hard to get out of your head. "Tight Black Rubber" has been a harder sell for me, but I keep warming up to it. Not all the songs are heavy; there's still some with acoustic guitar, and still tinges of the Americana-ish stuff that FB's been favoring for years now.

The album is sequenced well, with the slower ones broken up with the rambling force of tracks like "Your Mouth Into Mine," the steady thump of "You Can't Break A Heart and Have It," and the fun pop of "She Took All the Money." FB's wife Violet provides backing vocals on a lot of the songs, and I guess you could say she's playing the Kim Deal role. Her voice isn't as overwhelming and invasive (in general and production-wise), so she's good at providing texture and not commanding the track.

Could he have called this another Frank Black record and not have had anyone notice any difference? Yeah. But it's sort of fun that he's using his old name again. And when I saw him play some of these songs around the time of this release, he wasn't even playing guitar. Now that was a change.

"Tight Black Rubber"
Posted by Wockenfuss at 1:53 AM