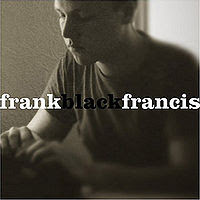 Another oddity the Frank Black/Black Francis/Charles Thompson/whatever-you-want-to-call-him-here category, this is a 2-disc set featuring Pixies music both old and new (which is why I file it under Black Francis).

The first disc is a tape of rough solo demos that were recorded prior to the proper recording of Come On Pilgrim. So, the sound quality is less-than-ideal, but it's really not that bad. My main beef with these demos is that I had to wait until 2004 to hear them. I can't express how much I would have jizzed in my teenage pants if I would have had this in the early 90's. Almost all of the songs from Surfer Rosa and Come On Pilgrim are included here, and hearing them broke down to their essence (if you will) is just great. Of course, I'm one of what Frank refers to as "the uberfans" in the liner notes, so I consider this a piece of history in its own little way.

The purpose of this tape was to give their engineer some songs to take notes on for the recording session, so Frank is often speaking little asides ("This is the one we want to sound like Hüsker Dü," etc.) that are interesting if you know what the end product sounds like. There's also extra parts in a few songs, a couple tracks that wouldn't see the light of day for some time ("Rock A My Soul," "Build High"), and one that I've never heard anywhere else ("Boom Chickaboom"). So, if you like to nerd out on early Pixies demos (and who doesn't?), this is a prime place to start.

The second disc is 2004 reworkings of Pixies songs. And when I say "reworkings," I mean tearing them down to the ground and building them completely back up. There are synths, rarely any drum beats, and enough effects to make your head swirl. I get the vibe it ain't for everybody, but I've actually listened to this disc way more than I ever thought I would. It's a little much if you're wearing headphones, but it's a great one for cleaning house or otherwise dawdling to.

I could do with "Monkey Gone to Heaven," but I've never been of the opinion that the world was in need of another version of that song. But, the versions of "Is She Weird?," "Caribou," and "Levitate Me" are awesome. And, if you can make it all the way through the 14-minute version of "Planet of Sound," you'll find it's not without its many merits as well.

So, it may be a Pixies-nerds-only release, but it's a must-have if you fit that description.

And I can't find any audio of it.
Posted by Wockenfuss at 1:18 AM