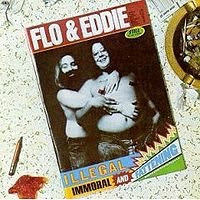 I can't believe I still have this.

I don't want to take the time to tell the long and fabled story of Flo & Eddie, so I'll give the quick version: they were the guys from The Turtles, then they were the guys with The Mothers. If you listen real close, you can also hear them on T. Rex's "Get it On." They're sometimes hilarious, often annoying, and really great singers.

I think this was my brother's record (though why he ever wanted it is beyond me), and he gave it to me as a b-team supplement to my extensive Zappa/Mothers collection. And that is why I still have it. I'm realizing now that I haven't listened to it in forever, and that's probably fine. It's very jokey and not always clever, with the highlight being a cover of "Eddie Are You Kidding?," a song they originally performed with the Mothers.

And that record cover creeps me the fuck out.

But I'll tell you what: if I was super blazed on some Maui Wowie in the mid-70's, I wouldn't get up and take this one off the turntable.

"Rebecca"
Posted by Wockenfuss at 1:33 AM

Yeah, that used to be mine. Sorry about the huge chunk taken out of the back. It was there when I got it. I bought that at a garage sale based on two things, the first being the really creepy cover. The second was that it had "Kung-Fu Fighting" on it, a song I found kitschy at the time after seeing it on one of those 70s compilation commercials. It was only later that I discovered that these yokels were part of the Mothers. I actually listened to this record quite a bit but never fully loved it.