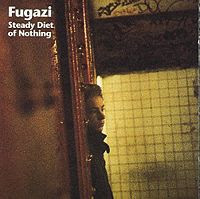 This was the first Fugazi album I ever bought, and for some odd reason I can remember it like it was yesterday. Or maybe a few years ago. I had read a lot about the band (again, back when Spin could be trusted), and was eager to check out this group who had managed to vehemently buck the system and still make some great music. In the early 90's, "selling out" was not to be done, and these guys sounded like they were literally the farthest thing from it. They were the only band I have ever heard of who actually turned down a major label deal. I was ready to get on board. I recall staring at both Repeater and this one, and finally deciding to go with the most recent one.

Steady Diet, as I touched on in my previous post, turned out to be a slow burn for me. A few of the tracks grabbed me the first time around ("Polish," "KYEO"), but as a whole, the music was not what I expected at all. After hearing other albums and gaining a point of reference, they would make perfect sense. But as an introduction, it was slow going at first. I guess I can credit both my empty pockets and my resilience for forcing me to stick with it. I could only afford new tapes maybe once a month, and when I made my choice, I was stuck with it. I stuffed Steady Diet into my Walkman and made it my mission to get to know it.

This record has always struck me as the odd one out in the Fugazi catalog. It's more sparse, the lyrics seem almost intentionally impossible to comprehend, and the production is noticeably more trebly than their other releases. If I were to recommend a Fugazi album to start with if you're trying to get into the band, this wouldn't be the one. But after repeated listenings, I learned to love it, and I now look back on it with fondness reserved for innocence: this was my rite of passage with a band that I would eventually call one of my favorite groups ever.

"Exit Only" - Yep, the first Fugazi song I ever heard. Picciotto just repeats the word "exeunt" over and over in the beginning of this track, and it immediately made me wonder if I may be in over my head. By the time he broke out "sympatric," I was sure I was. I would love to know what this song is about.

"Reclamation" - Ian's pro-choice song, and strangely, one of my least favorite Fugazi songs. I mean, I still like it, but something about it just never clicked with me. I love the lyrics, love the message, always enjoyed it live, just always wondered why I felt like it never quite fit here.

"Nice New Outfit" - Another Picciotto song that could easily be about major labels courting the band, but could just as easily be about something else. I really like this track, and always thought the "There's blood in your mouth, but not in mine" line was perfect.

"Stacks" - When I was a sophomore in high school, my English teacher gave us an assignment to bring in printed lyrics to one of our favorite rock songs, promising to pick a few to go over with the class and analyze. I spent hours deciding which song I would choose, hoping to not only increase my indie cred but also to stump the teacher, who I thought was an asshole. I settled on "Stacks," and this is what I typed out on my mom's old typewriter and handed in:

While we were going over "Stairway to Heaven" on the overhead (seriously), I realized mine probably wasn't going to be chosen. And, it wasn't.

"Latin Roots" - The band's lyrics were really starting to branch out, and this song is a great example. No idea what it's about, but the words read like poetry and the song itself is a good one.

"Long Division" - One of the many Fugazi songs with a memorable Joe Lally bass line rolling in before anything else. One of my favorite songs from this record, and it also contains some of my favorite lyrics: "This is a parting/ Some separation/ We lay in pieces/ Cracked to survive." Ian's great when he screams, but he's just as good when he sings.

"Runaway Return" - Another lyrical powerhouse by Picciotto, and another song that grew on me like a weed. The chorus in this one is really something, and it's yet another shining example of Guy's prowess on the mic as well as his always-increasing songwriting skills.

"Polish" - Another one of my favorites on this record, and I've always wanted to know exactly what it's about. It seems to be anti-TV, but not all the way through. Eh. Ian really brings the vocals on this one, doing the slightly melodic screaming thing like only he can.

"Dear Justice Letter" - Just realized there's not really a "Guy's slow song" on this album. This one is the closest thing, a sort of choppy track that I've really learned to appreciate over the years. "Your sorry lungs are all leaking" is a great line.

"KYEO" - The best song on this record, and a wise one to save for the end. The guitar line here is a bit of a precursor to the sounds the band would come up with next, and Ian sounds perfectly pissed and ready to take action. "We will not be beaten down" is a great line to end this song and this album.

Like you, this was the first Fugazi record I ever heard. Also like you, I wasn't immediately in love. I really loved "Exit Only" and "Stacks" upon first hearing but it took awhile for me to warm up to the rest. I am pretty sure it was only after I listened to "Margin Walker" and "Repeater" 150 times and needed something new. My problem with this one has always been side one. It really is not their best work. I have always thought that if they just would have swapped the sides that this record would have been much more appreciated. Can you imagine if it kicked off with "Long Division?" Critics would have lost their minds. "Reclamation," "Nice New Outfit," and "Latin Roots" have always been some of my least favorite songs in Fugazi's catalog. I can't explain it, they just are. Also, you left out "Steady Diet" which is a pretty sweet instrumental that on the cassette copy faded out side 1 and faded in side 2. I always thought that was pretty sweet. "Polish," "Long Division," "Runaway Return," and "KYEO" are just monumental songs. All in all though this album has always stuck out as just not quite sounding like them. I really want to get the remastered version of this as I think it might help the songs sound more "Fugazi-esque." When I was 14 I thought that "America is just a word but I use it" was the greatest lyric ever. I also wrote "Exeunt" under my name on everyone's 8th grade yearbooks. How cool I was.