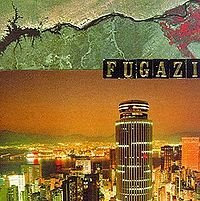 A lot of time passed between Red Medicine and this record (by Fugazi's standards), and when we looked at the title, I think we all took the finality implied in it a little too literally. But, I also remember shrugging it off just as quickly and not attempting to speculate on it too much. There was no reason to believe the band was over or anything like that. In the end (!), it's a sweet title, and the fact that it's inherently confusing makes it even more fun, I suppose. This is also one of my favorite Fugazi album covers, as it seems very unlike the band, and the bright, bustling landscape is the exact opposite of the barren monument shot on the front of Kill Taker. It's about the most color you'll ever see in any Fugazi artwork.

This was the first Fugazi album I purchased on LP upon its release, and when I took it home and unwrapped it, I was elated to see that it had been pressed on gray, swirly, thick vinyl, and had a gatefold cover that, when opened, has a great black & white shot of the band playing live. Combined with the thick-grade lyric sheet insert, you've got some of the band's best packaging. Not something they're known for, but it seems like it's worth mentioning.

End Hits has always struck me as the great underrated Fugazi album, but I'm not sure what I'm basing that on. For all I know, it could have been received quite well. I know I love it. Red Medicine had completely restored any faith I had lost in the band (which wasn't much), and I couldn't wait to see how they would follow it up. Turns out, they didn't fix what wasn't broke. Though it came three years later, End Hits is a fantastic follow-up to one of their best records, and it did even more to secure their status as one of America's most important rock (for lack of a better term here) bands.

I bought this LP a few months before moving to a new city, and it was definitely my soundtrack for some solitary times. It served me well, and got me revved up for the next phase of the band's output, which none of us were expecting. We'll get to that. For now, let's look at this one:

"Break" - Did I mention the band was incredible at opening their albums? This track jaggedly shimmies in, quickly nailing down their inimitable sound, then stops short for the only lyrics in its two minutes:

Yeah, so that rules.

"Place Position" - Guy Picciotto has a way of writing a hook that you wouldn't dare refer to as a "hook." This song is reminiscent of "Do You Like Me," but it's darker and somehow harder. His cries of "legal illegal" are the backbone of this track, and the way he intones them over the harrowing guitar line is just great.

"Recap Modotti" - Joe Lally gets moved up in the lineup, and somehow outdoes "By You." Another great song title, and his lyrics are some of the strongest on the whole record:

That's some good lyric writin', Joe. His vocal confidence has also increased since his last effort, and the song is a really solid first-sider.

"No Surprise" - I've often wondered if this song isn't maybe a minute too long, but that sort of nit-pickery will get you nowhere, so I try to squash it. It breaks in the middle, and the part at the end features some nice whispery vocals by Guy followed by Brendan Canty drum-beatery that is, as always, great.

"Five Corporations" - Ian's short and sweet entry this time around (I should have noted these from the get-go like Guy's slow ones!), and he delivers. The lyrics are more linear than a lot of other Fugazi songs, but the inclusion of the phrase "clusterfuck theory" makes certain that they're anything but plain.

"Caustic Acrostic" - The shortest song on the record, and another great one. Vintage Picciotto, all the way. Another incredible song title, and the chorus on this one is commanding. Sounds like it could be from '88, in a really good way.

"Closed Caption" - The only Fugazi song I can think of right now that finds Picciotto and MacKaye trading vocals mid-verse (correct me if I'm wrong). That small section alone makes this song awesome, but the careful structuring of the verses and eventual chorus is weirdly great as well. And quite an ending, giving Canty some real room to stretch out.

"Floating Boy" - Guy's slow one, and up to this point, the longest Fugazi song, at almost six minutes. I like this song, but I can't lie: it's a little challenging. I'll leave it at that.

"Foreman's Dog" - A huge song, filled with lots of variations in the guitar parts and plenty of sections. I dig it. Ian's vocals on the chorus really beef it up, and the lyrics are great, open to plenty of interpretation. Seems like it might be another commentary on the fucked state of the youth, but who knows.

"Arpeggiator" - If this isn't my favorite Fugazi instrumental, it's in the top two. It's a bit long, but the melodies in the guitar lines are great, and it's proof (not that we needed it) that these guys can really play.

"Guilford Fall" - Another Picciotto special, and he hits the mark again. Some weird shit going on with the vocals if you listen to it on headphones. It follows the odd structure of the rest of the songs on this record, breaking and building and crashing all over the place.

"Pink Frosty" - One of the most un-Fugazi Fugazi songs, and I've always thought it was great. It's dark, slow, and features MacKaye's most restrained vocals ever. The melody is really something on this one.

"F/D" - A giant closer, as if you would expect anything else. It's not as monumental as some of their other ones, but it's great for this record; sprawling and falling all over the place and cutting itself short. You can almost picture Picciotto writhing on the ground during the choruses, and then the song ends, leaving room for some odd bits that sort of trail out.

Some other fine videos that really embody the band (and the shit they had to put up with) here and here.
Posted by Wockenfuss at 11:25 PM

I don't know what happened when this came out but I just never listened to it as much as I should have. I was right in the middle of my Matt Steinke/Feelings/Built To Spill obsessions and just never really spun this as much as I should have. I still don't. While I don't dislike this record it has never really grabbed me either. This is the first album in their chronological catalog where I can not hum the tune if you named a song. Some I know, some I don't. "Five Corporations" is insane. Other than that, honestly "Recap Modotti," "Caustic Acrostic" and "Place Position" are really the only tunes that I would crank up in the shuffle. "Recap Modotti" is especially great. "Foreman's Dog" is also pretty enjoyable. I have always found the rest of it simply ordinary. This, and their next full-length, are both records I have always meant to go back and give more energy to. Which is sad because the previous albums never felt like a chore. "Pink Frosty" is simply self-indulgent tripe to me. I do love the album cover. I can't believe that this is 11 years old. I still consider it "newer."