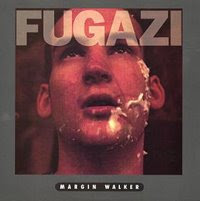 Fugazi has, for 18 or so years now, been one of the most important bands in my life. It's rare that you find a group with a dynamic like this: two lead singers, both great, both incredible lyricists, powerful apart but even more powerful together.

And that's just scratching the surface of their brilliance. Ugh. I could write a book about how Fugazi is one of the most important bands of not only the last twenty years, but in the history of rock. I think they're that good. And when I start talking about it, I realize I feel really strongly about this point. Being a teenager when Fugazi was still actively making music kept life exciting. Their music could get me riled and nervous to the point of almost vomiting, and there's only a handful of bands that have really got to me like that.

So, we're starting with the Margin Walker EP, which is going to make the next entry slightly out of order, but not really. I'll explain in that one. Is Fugazi worthy of a song-by-song breakdown? How dare you even ask.

"Margin Wallker" - One of the great things about Fugazi is that they always print the lyrics inside their albums, but never talk about what the songs are actually about. This is both endlessly frustrating and the best conversation piece you could ask for. I think any hardcore Fugazi fan has spent an embarrassing amount of time studying their lyrics and still getting nowhere. This will be common thread throughout a lot of songs, especially the ones written by the consistently indirect Guy Picciotto (Ian MacKaye's lyrics are sometimes easier to decipher).

This track is one of those. If I had to guess what it was about, I'd say an assassin at an open window, but that seems too obvious. Another common thread: it doesn't matter. Guy would slow down as the years went by, but here he's young, aggravated, and wrenching over the inimitable guitar while he backs himself up on the barreling chorus. MacKaye yelps in the background on key parts, and this song will run you over.

"And the Same" - Basically a call on MacKaye's part to get your shit together as a human being, and not the first or last time he'll address the issue. As is the case with a lot of early Fugazi tracks, Joe Lally's bass line and Brendan Canty's drums own the verses, and then the song crashes in massively on the chorus. I always loved the hook on this one.

"Burning Too" - MacKaye and Picciotto together, urging us to not fuck up the planet. I realize that doesn't sound like too compelling a topic for a post-punk song, but trust me, it is. Again, the chorus is just too good.

"Provisional" - Picciotto sings lead on this one, and I'm not going to venture a guess as to what it's about. This is a Fugazi favorite, a song that seemed to get played live a lot. And with good reason, Guy's vocals are great on it, and the guitar work really stretches out.

"Lockdown" - Short but sweet, another track that finds Picciotto in a frenzy and the guitars matching his intensity. I still don't know how they got guitar sounds like this. An oft-overlooked early Fugazi track.

"Promises" - When you're a disaffected youth, you dream about songs like this, ones that you feel sum up exactly how pissed off you are. "Promises are shit" skips any efforts at lyrical trickery and gets right to it. And we loved it. And when I listen to it now I can still hear why. Stupid fucking words, indeed.

"Margin Walker"
Posted by Wockenfuss at 2:29 AM

This EP is amazing. I would even say that I prefer this to "7 Songs." Every song here is mixtape worthy, not something that can be said for all Fugazi albums. "Margin Walker" itself is one of my all-time favorite songs of theirs. It is pure insanity. The album cover is just bizarre.