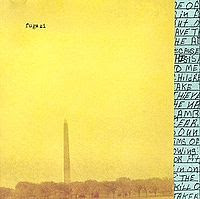 In the summer of 1993, my brother and I took a two-week trip to the East Coast to visit family, with a weekend scheduled to be spent in Washington, DC. We joked about the possibility of Fugazi playing in their hometown while we were there, but agreed the odds weren't in our favor.

When my brother eyed a poster adhered to a light post advertising a free show, he stopped, did a double-take on both the headliner and the date, and almost started screaming. Now I don't believe in, well, anything really, but something had aligned for us. Not only was Fugazi playing in DC the next day, they were playing a free show down the hill from the Washington Monument. We knew this would be a rude inconvenience to our relatives who were showing us around, but even then, we were more than aware of this being once-in-a-lifetime opportunity. We told them we were going to go, and we did.

In On the Kill Taker had been released a few months earlier, and in fact, I had just purchased the CD while we were on the boardwalk in Ocean City, NJ, the previous week. I'm fairly certain I didn't even have a CD player with me, but the idea of buying a Fugazi CD on the East Coast seemed pretty cool to me. My brother had the cassette, so we had been listening to the album since it was released. It was certainly different than their previous efforts, but to me it sounded like a fully realized Steady Diet of Nothing. The band was getting more diverse in sound and words, and they sounded huge.

Losing ourselves in sea of Washingtonians (is that what they call them in DC?) that day, we felt both a million miles from home and more comfortable than we had in days. We were finally back with people our age who had their priorities straight: why would you not be on this grass in the blaring sun, waiting for the best live band in the world to play on their home turf? We couldn't believe we got to be a part of it, to the point where it almost didn't seem real. In On the Kill Taker seemed to be turn-off for some Fugazi fans (when Spin gave it a less-than-favorable review I felt incredibly betrayed), but watching them that day I think we knew the band was in their absolute prime. Maybe the new record was a little more "experimental" (whatever that means) than their other shit, but weren't we ready for it? This was a group that thrived on never sounding still, and we wanted nothing more than to follow them wherever they went.

I can't listen to this record without thinking about that day, especially when I look at the cover. It just made too much sense. There are a handful of shows I've attended in my life that I place a notch above others in my mental list, and this one is usually at the top. At one point we were standing ten feet away from Guy and Ian as they were watching the opening bands from the crowd, and we did what any self-respecting Fugazi fan would do: we left them alone. And then we saw them play for almost two hours, running through old stuff, as well as a lot of these songs.

"Facet Squared" - One of my favorite Fugazi song titles, and a perfect track to start this one off with. Watching Ian flip the Rhythm switch on his guitar to get the blippy sound at the beginning was an extra treat live. His vocals on this song are classic MacKaye.

"Public Witness Program" - While some of Picciotto's lyrics were getting longer and more complex, he was still more than capable of writing fast songs with minimalistic structures in the words. This is a perfect example of Fugazi moving forward with their music but not abandoning what made them great in the first place.

"Returning the Screw" - We didn't know what to think about this song the first time we heard it. Rarely was the band slow and haunting, but they border on it here. It's a slow build, and I think at this point we weren't used to being so patient waiting for the inevitable crash-in. I quickly learned to love this song.

"Smallpox Champion" - One of my favorite tracks on this album, and it features Picciotto really outdoing himself. The "cha-cha-champion" part that bubbles up towards the end was uncharacteristically poppy (relatively), completely unexpected, and incredible. Still is.

"Rend It" - Another great song title, and another case of Picciotto completely owning the track. MacKaye comes in on the chorus, and it becomes really powerful. Another loud-quiet-loud Fugazi special like only they can pull off without sounding overly formulaic.

"23 Beats Off" - I have a feeling it's tracks like this one that threw people for a loop when this first dropped. I know I wasn't expecting something so quiet, semi-sparse, and deliberate. And long. MacKaye has a melody in the middle of this one ("He used to pretend...") that is almost buried under the wall of guitars, but when you hone in on it, it's strangely pretty. An almost seven-minute Fugazi song? Unheard of. But apparently not impossible. Great noise.

"Sweet and Low" - Following the three-plus minutes of feedback and clamoring that wrap up "23 Beats Off" with a slow-moving instrumental was a bold move. This is a great song, though not nearly as urgent as almost any other Fugazi instrumental.

"Cassavetes" - After the wordless mid-section on this record, they wisely bust back in with this densely-packed number, a song led by Picciotto and filled with wild guitar screechery. This song is nuts.

"Great Cop" - If people worried that Fugazi was maturing to the point where they wouldn't be button-pushers, this song should have easily assuaged those fears. The fastest and most aggressive track on this whole record, and also one of the best.

"Walken's Syndrome" - Guy taking the reigns again and brutalizing a melody in the best way possible. This song starts with some weird noises, but when it kicks in, there's no going back. "Fragile stem," what a great first line.

"Instrument" - A catchy melody that only MacKaye could pull off hammering home the way he does. I love the lyrics to this song, and while I was a little thrown by the structure of it the first few times I heard it, I quickly learned to enjoy the shit out of it.

"Last Chance for a Slow Dance" - The first official "Guy's Slow Song." There's a clip on the Instrument DVD of the band playing this song that focuses mostly on Picciotto while he's wrenching his guitar and belting this one out, and it makes a great case for why this is such a fine song. If you need further convincing, read the lyrics. They're some of the finer ones he ever wrote.

I'm realizing now that I have a Fugazi Live Series CD of that show in DC, so I could probably have saved that story for then. Eh, I'm sure I'll figure out more stuff to say about it.

"Last Chance for a Slow Dance"
Posted by Wockenfuss at 2:52 AM

This is my second favorite record of theirs ("Repeater being the first") and it is a close second. I, like you, will always link this album with that fateful DC show which really was the greatest show I ever saw. That summer I listened to this one pretty much non-stop. I studied the lyrics. I studied the art. It all just seemed so wonderful. I can't name a bad song on this one, even though "Last Chance" is a tad too long. Side A just blows you away out the gate. "Facet Squared" into "Public WItness" is a genius stroke of sequencing. "Sweet And Low" allows you to take a breath and then the rest of side B just tears right through. While their later albums are all good none have the energy that this one does. They seem angry and out to prove something. I also love being able to say that I saw them touring on this album playing at the Washington Monument that is on the cover. For free.