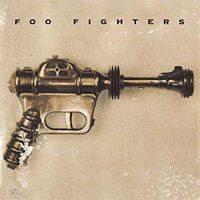 I didn't know what to expect from the Foo Fighters, but I didn't get my hopes up. Part of me just wanted the whole of Nirvana to die with Cobain, for Grohl and Novoselic to be too devastated to go on in any capacity, and to feel that it wouldn't be right anyway. I think a lot of us just expected them to disappear. Or to release records with new bands and not have anybody really give a shit about them. (Novoselic managed that one some years later.)

When Foo Fighters popped up, I wasn't shocked (Grohl sang and played guitar on the Nirvana b-side "Marigold" only two years earlier), but maybe I was a little surprised at the quickness with which Grohl had picked himself up and was moving on. It still felt wrong to me, but as I've stated before, Nirvana is one of the only bands that I can manage to get protective about (when I see shit like this, I get more upset than I would like to admit), so I was wary, but remained reticent.

The first time I heard "This Is A Call," I breathed a sigh of relief. It wasn't anything like Nirvana, but it was good. It was great. It had lyrics that didn't seem to make a whole lot of sense but seemed to work incredibly well on a rhythmic level. It was rough, but not messy. And Grohl could sing. And he could play everything else, apparently. When they didn't make a video for the song I became even happier. He was sticking to it. This wasn't about him, it was about these songs he'd been working on for years in his spare time.

They ended up making a video for the second single, "I'll Stick Around," but it was very nerdy, very anti-MTV, and Grohl said he only did it because one of the dudes from Devo wanted to direct it and he didn't want to turn him down. Of course, MTV played the shit out of it. Somewhere between this song and "Big Me" (I guess the precise moment was somewhere around the time they decided not to make a video for the excellent "For All the Cows"), the Foos went into cheeze mode, made the fucking Mentos video, and things started going downhill.

But for those few months, they were shaping up to be the cool band to help us all into the last half of the 90's. That didn't work out, no harm done. They managed to make two incredible records, and that's more than I expected.

So, yes. This is a great record. Forget all you know about the Foo Fighters now. Forget that acoustic self-indulgence and the videos that aren't cute now because they never really were in the first place. Instead, think about a dude who has just lost his band (which happened to be the biggest band in the world), one of his best friends in the world, and is 26 years old. Picture that dude recording every single part on a 12-song record and making it sound angry and sad and weirdly optimistic and also like it's four separate guys all locked in like they've been playing for years.

Then listen to this album and tell me it's not one of the best rock records of the 90's.