Stallion Alert at the Movies: Instrument (1999) 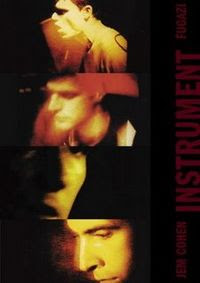 I'm going to throw this in here, not only because I feel it's completely relevant, but also because I watched it for about the tenth time the other day. Whenever I start going through my yearly Fugazi phase, I always end up throwing this movie on. I finally replaced my VHS copy with the DVD last year, and I hadn't watched it all the way through since then, either. So, it was inevitable.

Instrument is truly a film like no other, a labor of love by Jem Cohen, who put it together after spending over a decade shooting the band whenever he could. It's not your typical rock-doc; not even close. It's not linear, not chronological, and at times, it's what some might consider "slow." Songs start and then aren't shown finishing, interviews are present but very few were actually conducted for the film, and the segments featuring kids waiting outside to get into shows might really test the patience of some.

Guys: unless she is a fan, don't make your girlfriend sit through this movie. She will not like it. It is a solid two hours, and it feels like it. For me, that's great. For somebody who doesn't follow the band religiously, it might be too much. So having given that little disclaimer, let's move on to why this movie is fantastic.

While there are are only two songs that are shown in their entirety (though three additional performances have been added to the DVD release), there are tons of great live clips. It is a bit frustrating when it shows the band starting a song and then cuts off right when they're getting into it, but this isn't a concert movie, so I guess that's part of the deal. The live version of "Shut the Door" at the beginning and "Glueman" at the end are tough to beat, and shown almost unedited.

Some random clips of the band pulled from TV shows are really cool to see, as are some semi-grainy VHS recordings of shows from the 80's. Like I said, it's not chronological, so you sort of feel like you're jutting back and forth at times, but the on-screen captions do a fine job of informing you as to when the performances took place, and the detailed liner notes are another great reference.

The interviews with the band are few and far between, but the ones that are there are great. And the footage of them in the studio is fun to see for both a peek into their creative process and to confirm that what so many dipshits are wrong about: they do, in fact, have a sense of humor.

If you're a fan of the band, you've already seen this. If you're just getting into 'em, you should see this. It'll make you like them more.

"Glueman" (from Instrument)
Posted by Wockenfuss at 5:03 PM

I saw this once with you. I remember thinking that I liked it but had no interest in ever really seeing it again. Sometimes the band can be a bit too pretentious for their own good (see: Joe Lally solo albums) and this was the case for me. Would it have killed Cohen to put together a coherent documentary? I mean, honestly, does indie cred always have to equal avant garde? I'm not looking for a slick production, I just have never understood what this is supposed to be. I look at this like a parent. I wasn't angry. I was disappointed.