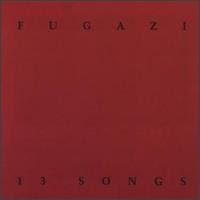 This CD compiled the first two Fugazi EPs: 7 Songs and Margin Walker. So technically, the first seven songs on this disc were released before my previous entry, but this CD was released later in the same year. So there's the explanation on the chronology, just so we're on the same page.

The last six songs on this one are Margin Walker, so we're just going to go over the first seven. This album is a huge deal to a lot of people, and it should be. If you chose to make this collection your rock bible, I think you'd be in good shape. I should mention that this was not the first Fugazi album I owned, but I was damn glad to discover it when I got into the band a few years after this.

"Bulldog Front" - First off, a great title for a song. This is another composition (it would seem) that's urging people into action, and it makes a good case. Also may be the only song ever to begin with the word "ahistorical." A great build at the end, and a huge payoff.

"Bad Mouth" - The jump that Ian MacKaye made as a songwriter in the years between Minor Threat and Fugazi is unreal. Most people would kill to write a song like this, and he makes it seem like it's no big deal, rattling off what seem like non sequiturs through a melody that is impossible to launch from your head. And the "you're always talking talking talking talking shit now" part? Incredible.

"Burning" - Part one in the Fugazi "Burning" series ("Burning Too" being the sequel). Another short one featuring Picciotto on lead vocals, and it's strong, but stuffed between two Fugazi classics, it too often seems like a breather, which is a shame, because it's a great song.

"Give Me The Cure" - Vintage Fugazi, pure and simple. If you wanted to play one song to give somebody an idea of what the band sounded like, this wouldn't be a bad choice. It starts a little wild, breaks down, and when Ian and the second guitar kick in about a minute and a half in, it all comes together. Seeing this song live is almost too much for one man to handle.

"Suggestion" - I was watching a Riot Grrrl documentary a few months back, and in the special features they had an extended interview with Ian where he talked about how some of the ladies turned their back on him after he wrote this song, because it details sexual harassment/women-as-objects from the woman's point of view, and they didn't feel it was his place to do that. They're a fickle bunch. I always thought it was pretty gutsy to even address the issue, and I think they actually pull it off really well. Of course, I would think this was a fantastic song regardless of the lyrical content. It's got a bunch of different parts, and it was one of the first "long" Fugazi songs, clocking in at almost five minutes. I used to play this one over and over.

"Glue Man" - Probably my least favorite song on this whole disc, and I have never really known why. The first time I saw them do it live, I felt like I got it. I think maybe it just doesn't translate well on this recording. Still a fine song, to say the least. Who doesn't like songs about inhalant abusers?

The "7 Songs" EP is what many people say is Fugazi's best work. I don't know why but that never made sense to me. While I think this is a great record it is by no means their pinnacle. That being said every song is great and is an incredible first album. I agree with you comments on "Glue Man." "Waiting Room" and "Bad Mouth" are great songs but sound nothing like Fugazi if you think about it. I think hearing this after the next three records may have caused me to think that it wasn't as great as I had heard about. But then again it is an incredible album. I am just talking about in the context of their own catalog. Oh, and "Give Me The Cure" is just an insane song.

Stumbled on all you fugazi reviews. Great stuff! Didnt see an argument review though..