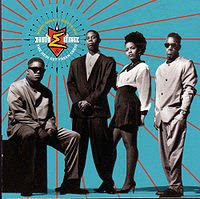 Listen: if you're gonna put this on sale for a couple bucks, I'm going to buy it.

And buy it I did. And it's ended up being well worth a few dollars. I get the vibe that this record was intended to bring Doug E. back to the mainstream, and clearly that didn't happen, but this certainly wasn't a wasted effort. There's a disconnect that runs throughout the album that may have hurt it a bit. It's constantly shifting gears from The Nine-Deuce to Back In the Day, and it gets awkward. If Fresh was trying to be relevant in the New School, he sure does a lot of talking about how dope we was in the Old. It plays better now, but in '92, I bet it sounded a little off.

Between "Back In the Dayz," "The History (interlude)," and his lame (and slowed down for some unknown reason) take on "You Make Wanna 'Shout,'" dude manages to sound anything but ultra-hip. But, tracks like "Imagine Me Just Pumpin' It Up" are vintage early-90's rap; some really cool shit. In the end, this record needs more of these and fewer slow jams like "If I Was Your Man," "Come In From the Rain," and "I Need My Woman Tonight," which all push five minutes and inexplicably are sequenced right in a row.

This is another album that, while I don't often put it on, when it comes through the shufflin' iPod, I let it ride.