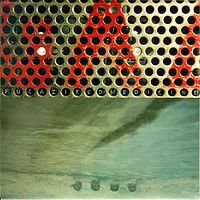 While In On the Kill Taker may have been given a lukewarm response for not being as "intense" as some of their previous work, Red Medicine proved that Fugazi still could turn on the juice. Calling any Fugazi album a "return to form" doesn't make any sense given the diversity of their output, but this record feels like the work of a group with a score to settle. Their anger is manifested throughout the course of these songs, but it's also balanced out with some of the most prettiest songs the band had ever written at this point.

I became immediately obsessed with this record upon its release, listening to it repeatedly during a summer job painting my mom's neighbor's house. It worked wonders for me in that regard, providing a perfect soundtrack for back-breaking work in the searing July sun. We weren't worried about the band's direction after Kill Taker, but we might have held some silent fears about what the next album would sound like. After hearing Red Medicine for the first time, I felt like a fool for ever doubting them. I'm a die-hard Repeater fan, but this one gives it some competition.

We saw the band play at La Luna on this tour, and it was one of the most exciting shows I've ever seen. If I thought they were in their prime in '93, I had to admit terms like that were wasted on a band like this. They were apparently going to be near-perfect forever. It's almost 15 years later and I can still listen to this one without skipping a track.

"Do You Like Me" - There are rumbling screeches that usher in this track (and the album itself), but when they clear the way and the opening guitar kicks in, all bets are off. Picciotto's vocals in this song seem like they're going in one direction, then they quickly jut to incorporate held notes and quick-jumping refrains ("Lockheed Lockheed Martin Marietta"). Strategic but filled with feeling.

"Bed for the Scraping" - Oh, how this song gets to me. The dancing bass line that opens it is pure Lally, and when Ian comes in yelling, "I'm sick with this, I'm sick with this," I always end up singing along. And another great song title, and amazing lyrics throughout.

"Latest Disgrace" - A rare Fugazi song where it sounds there is a mild effect on the vocals, and it gives the entire track a texture that works incredibly well. The two guitars fill everything up with precise noise, and Guy again proves he has a way with words.

"Birthday Pony" - Yet another shining example of MacKaye using loud against quiet and crafting a song that is both brutal and occasionally serene. There's a line in the middle where he gut-wrenches "I needed something to do and so I split into two" that is unforgettable, especially when it's followed by sinister screaming that turns to maniacal laughter. Awesome.

"Forensic Scene" - A great melody by Picciotto, on one of his two "slow songs" on the record. The guitar is strangely clean for Fugazi, and the chorus is amazingly pleasant. They could really open this one up live.

"Combination Lock" - The first of two instrumentals on the album, and it features some intricacies that remind us of something we rarely acknowledge: these guys can really play guitar.

"Fell, Destroyed" - Guy's other "slow song," and it makes a great bookend to the two songs that preceded it. Features the sweet guitar trick of strumming the strings right next to the tuning pegs, and seems to address claims that the band is too serious: "Can't you sense my sense of humor?"

"By You" - Joe Lally steps up to the mic to sing the longest song on the record. I have to admit, hearing this for the first time was jarring, but we learned to love it. It wasn't hard; this is one of the strongest songs on the album.

"Version" - One of the oddest songs on a Fugazi record, not counting the demos and bits on the Instrument soundtrack. In that movie you can see Guy playing a clarinet, and it makes the unrecognizable noises in this song make a lot more sense.

"Target" - The lyrics to this song continue to blow my mind, and so does the guitar riff that heads it up. Seeing them play this live almost made me barf a few times; that's how much I love this track. This is an oft-discussed song, as it's the one where Picciotto sings, "I hate the sound of guitars." He also says "We could be making it oiling like crime/ We could be making it staking last dimes," which still makes my skull hurt with its goodness.

"Back to Base" - If Guy has his slow songs, Ian has his under-two-minute fast songs (See: "Great Cop," "Greed"). This song feels like it's barely getting started when it barrels to the end and checks out as fast as it checked in. "Whole lot of not."

"Downed City" - Another track on this album that starts with some slow-paced noise and then busts into a tightly-woven punk-ish song that will knock you back. Thank goodness for printed lyrics, because I can't understand a word Guy says on this one.

"Long Distance Runner" - Fugazi knows how to open an album, and they damn well know how to close one, too. If you study the lyrics to this whole record long enough (especially the songs on which Ian does vocals), you'll get the sense that the band is weary and warped from life on the road, continually moving and feeling removed from home. Or at least that's what I take away from it. This song seems to both embrace and curse their chosen existence. It's poignant and fantastic.

Not that anyone's keeping track, but if you're looking for a Fugazi album to get your feet wet with, this one ain't a bad choice.

"Bed for the Scraping"
Posted by Wockenfuss at 2:48 AM