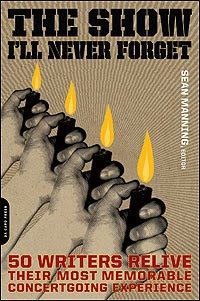 Thought I'd try another fun feature on the site. I'm always reading books about music, so why not write 'em up, eh?

I just finished this one, a collection of 50 essays from a broad selection of writers, each taking their own approach to recollecting their most memorable concert. It's made clear in the intro that the "most memorable" part is key–it's not necessarily the best show they've ever seen, but the one that stands out the most for whatever reason. Strangely, a lot of the writers admit to barely remembering anything about the shows they've chosen to write their pieces on. This is mildly annoying, because a lot of the essays end up focusing more on personal stories that surround the event, instead of the actual act or music in question. The most entertaining prove to be those that shoot for an equal balance, explaining the circumstances of the show, but also providing some solid details on the performance.

The entries are arranged chronologically, starting with Miles Davis in 1955, and ending with Metric in 2005. They're scattered well, with a surprising number of years represented by the shows that coincide with them. The music is all over the place too, with "big" artists like The Beatles, The Rolling Stones, and Prince getting some ink, but lesser-known acts like The Lounge Lizards, Redd Kross, and Mink DeVille also getting in there.

I'm always game for reading about artists that I have I either don't know about or have no interest in, and only a few of the essays here tried my patience. The final one on Metric (by Daniel Handler and Andrew Sean Greer) was self-aggrandizing, four pages too long, and ultimately very boring. An unfortunate one to end on, for sure, especially since it's followed by the list of essays that didn't make it into the book (Pavement!). The other one that stood out as patently egregious was Max Allan Collins' take on a Kevin Spacey (seriously) show he saw when Spacey was doing a short nightclub tour to promote Beyond the Sea. He spends four pages simply doing a mini-biography of Darin, then tells us how his fame as a writer (and some shameless badgering) allowed him to meet Spacey after the gig. Neat-o.

Other than those, the rest were solid, or at least short enough to not push it. Charles R. Cross predictably writes about Nirvana (Halloween, 1991), but it's a sort of all-access view of the show that paints a quick but noteworthy picture of Cobain at a true precipice in his life, and a band at a huge moment in theirs. Chuck Klosterman writes a comical essay on Prince, Jerry Stahl tries a little too hard in an interesting take on an interview and show with David Bowie, and Marc Nesbitt's entry about seeing the Beastie Boys in 1987 with Public Enemy as the opening act was both funny and awkward. One of my favorite combos.

My favorite recollection came from John Albert, a writer I'd never heard of, who wrote up his memories of seeing Black Flag (pre-Rollins) in the fall of 1979. Hearing about his punk rock shenanigans made me both laugh and cringe. Also a great combo. I've since ordered his book on Amazon. It was only a penny, which makes me want to read it even more.

All in all, a damn fine book. I breezed through it quick, and actually learned about some artists of which I was sadly unaware, and was reminded that Rick Moody is a tremendous blowhard.
Posted by Wockenfuss at 12:39 AM