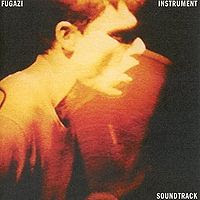 I don't think anyone could have guessed that Fugazi's final release of the 90's would be a soundtrack to a film about them. But, once you learn the facts about the project, especially that the film was over a decade in the making and it was put together by their good friend Jem Cohen with full band participation, it seemed less shocking and more exciting. I went immediately from "that doesn't seem like them," to "holy shit I cannot wait to see this movie."

For the life of me, I can't remember if I saw the movie first or if I bought this album first. I know that I bought this right after it was released, because I was looking for the vinyl and the store didn't have it yet. (In fact, the clueless clerk at Ozone informed me that it probably wasn't going to be released on vinyl–dolt.) I couldn't wait, so I picked up the CD, which leads me to believe that I heard this first.

The Instrument Soundtrack is, in my opinion, for Fugazi fans only, though I certainly could see the casual listener getting plenty of enjoyment from a lot of the songs. However, with all the demo versions of existing tracks, I can't help but think having a frame of reference as to what the songs ended up sounding like in their final versions wouldn't aid in the listening quite a bit. Of course, that's the only way I've ever heard it, so my perception is definitely skewed in that direction. Either way, this is a really interesting record. Some of it is challenging, some of it is rough, and some of it is really pretty. Between these songs and the corresponding film, it felt like the band was finally beginning to open up a little bit, allowing us to see something other than a finished album or a show on stage. They were just little glimpses, but hearing how some of these songs started out proved to be fascinating for me.

"Pink Frosty Demo" - An early version of the penultimate track on End Hits, before any vocals were added. The melody is clearly identifiable, and this rough take shows where a song like this starts.

"Lusty Scripps" - Dating from '94, this little jam seems fairly free-form, complete with Guy wailing on the clarinet off in the background.

"Arpeggiator Demo" - A rough version of the instrumental that would end up End Hits, especially notable for featuring Brendan playing guitar, drums, and bass. Picciotto assists on guitar and "drum machine bass drum," and that's it. In case I didn't mention it before (and I didn't), these guys really are a collective, each being proficient on multiple instruments and taking part in the songwriting.

"Afterthought" - Fugazi without Guy, and one of the only songs where MacKaye is credited with playing keyboards. A nice short and sweet one, circa '94.

"Trio's" - Another mellow instrumental, again notable for Brendan playing melodica and the absence of Picciotto. This song works really well in the film.

"Me and Thumbelina" - This song makes little to no sense unless you see the movie, but it's only about 45 seconds long, so whatever.

"Floating Boy Demo" - A considerably shorter (and vocal-less) version of the song that would be on End Hits. Really sparse and sort of skeletal, but you can hear it forming.

"Link Track" - The only composition from the 80's on this whole album, and though it doesn't sound completely out of place, you could probably pick it out as the band's earlier work if you tried.

"Little Debbie" - Apparently this was just a one-off jam from '94 (you can hear Ian say "go to the A" at the beginning), but it's a pretty badass song. It's the first song with real vocals on this album, and though the guitar tones are ass, it's still a lot of fun. Though it fades out before the end, which is a bummer.

"I'm So Tired" - Oh, how many mixtapes have I put this on? If there was ever a two-minute gap to fill (especially to close out a side or the whole tape), this was the go-to song. The most un-Fugazi track they ever released, and really the show-stealer on this soundtrack. "Im so tired/ Sheep are counting me." That is great.

"Rend It Demo" - The only demo not from the End Hits sessions, and perhaps the most personal of the all recordings, as it features only Guy on his four-track cassette recorder. You can tell what the song is, but only barely. Maybe the only song ever featuring "dehumidifier percussion."

"Closed Captioned Demo" - Another one with Brendan taking the reigns (guitar, bass, drums), only aided with some help from Guy on the guitar. The recording is scratchy, but the song seems pretty fleshed out by this point. By far the longest song on this set, though that's mostly because of the crazy drumming that takes up the last three minutes. It's worth sitting through.

"Guilford Fall Demo" - One of the stronger recordings on this record, as this feels almost completely done. There are no vocals, but the parts are quite close to the finished version.

"Swingset" - A minute and a half of a four-track cassette thing from '94. Sounds like a little jam, and it's nice.

"Shaken All Over" - Little dickaround in the studio from '91. If you listen on headphones you can hear some fun weirdness in the background.

"Slo Crostic" - This song plays a huge part in the film, and really sums up this record perfectly, especially given its wise placement at the end. Probably my favorite song after "I'm So Tired." And yes, it is a slow version of "Caustic Acrostic."

I had a slightly hard time with this album when I first heard it, but I've really learned to enjoy it over the years. It's probably the only Fugazi "rarities" compilation we'll ever see, and I'm happy there's one at all. It's not for the first-time listener, but anybody who likes the band should be able to find something here.

I would barely call this for completists only. I have never really listened to this more than a handful of times. The fact that it is a ton of demos of songs that I wasn't already in love with doesn't really sweeten the pot for me. I always found "Little Debbie" and "I'm So Tired" enjoyable but the rest I can live without. But that's just me.