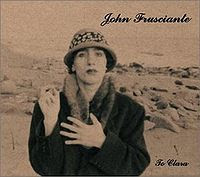 I'm pretty sure I bought this for a dollar sometime last year. The price was right!

A lot has been made of this record over the last 15 years, and most of it's bullshit. If you want to choose to believe that this is some misunderstood work of genius, that's your business, but come on. Come on. Is this really much more than the incoherent four-track ramblings of a dude strung out on heroin? Nah.

There are a few tracks on here that are relatively interesting, but I wouldn't call them good. But, Frusciante has such a devoted group of fanboys all over the world that this has been elevated to cult status amongst his devotees. And really, it's one of those records that works perfectly for the I-get-it-and-you-don't crowd, much like Mike Patton's solo records (which we'll get to), or Lou Reed's Transformer (which we won't). It's fun to like something that a lot of people consider shit. I should know–I'm a big Zappa fan.

So, I get it. And maybe that's why I keep this CD. I keep waiting to hear what some people must hear in this thing. It's just never happened. One of my friends bought this when it came out, and I distinctly remember being surprised by two things: 1.) That Frusciante was coherent enough to release a 25-song album, and 2.) That he had called track 10 "Your Pussy's Glued to a Building On Fire."

I have no trouble understanding why that's great.

Ah, the Frusch. I bought this when it came out and I thought it was amazing. Here are the caveats: 1./ I was a freshman in college; 2./ There was a lot of acid in the dorms.