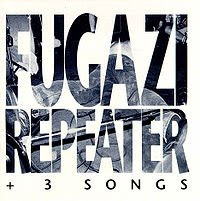 There are records that I have romanticized over the course of my life, some to the point where I almost convince myself that they can't possibly be as good as I make them out to be. (Back in my hard-drinkin' days, I was notorious for rampant hyperbole when making outrageous claims about albums that I merely liked a lot–that has thankfully ceased.) But I've realized that the records I've spent so many hours discussing and dissecting really are as good as I say they are, or at least they are to me.

If you haven't picked up on it yet, this is one of those records. In the past 15+ years, I have sung the praises of this album to anyone who will listen, and probably to many people who were just too polite to tell me to shut up. To those people, I want to say thank you for being polite, and I apologize. But if you haven't picked this up yet, I clearly didn't get my point across. Call me. We'll chat.

I purchased the first three Fugazi full-lengths out of order, so I'm pretty sure I heard this one second, after initiating myself on the challenging Steady Diet of Nothing. I'll talk more extensively about Steady Diet in the next entry, but the point I want to make in its relation to this record (from my perspective) is this: it wasn't until I heard Repeater that I felt I really "got" Fugazi. Upon listening to this album, it suddenly made the tracks on Steady Diet make a lot more sense, both musically and lyrically. While Steady Diet sort of chipped away (and sporadically bludgeoned) its targets, Repeater proved to be the initial full-on assault that needed to be launched to get things going.

At the risk of both sounding flowery and failing at an analogy, I'll say this: If Fugazi were a fighter coming up, their first two EPs were the ascension through the ranks, Repeater was the title fight, and Steady Diet of Nothing was their first title defense after learning some new tricks. But I digress.

I am always hesitant to crown one Fugazi album as my favorite or the one I consider the best, but over the years those titles have definitely been thrown around more when talking about this record than any other. There just isn't a bad moment here. I've been listening to it for so many years, I always come back to it, and it's always there for me. My teenage years wouldn't have been my teenage years without these songs. Alright, enough fawning, let's do it.

"Turnover" - Fugazi was one of the only bands that had me reaching for the dictionary when I was younger. It was usually on the songs sung by Guy Picciotto, that literate bastard. The first lyric of this excellent opener is "Languor rises reaching/ To turn off the alarm," and even though they misspell it as "langour" in the lyrics, I can credit them for teaching me the meaning. It was always great to see them play this live, watching them using the volume knobs on their guitar to replicate the ominous opening that fades in and out. They had some tricks.

"Repeater" - We may never know how they got their guitars to sound so fucking awesome in this song, and that's OK. Just realize that they do. And also take note of how this is the best song ever written about the judicial system's "3 Strikes" laws.

"Brendan #1" - The first of Fugazi's instrumentals bearing the name of a member of their rhythm section, punctuated by its placement as the third track. Not only is it not a momentum-killer, it's an incredible song, featuring some of Brendan Canty's most rumbling drum work.

"Merchandise" - When Fugazi took on issues as broad as "people purchasing things" and rolled their commentary up into a 3-minute song that managed to sum up their stance on it with razor-like precision, it almost seemed too easy. This is one of the great Fugazi songs, right up there with "Waiting Room" as far as direct association with the band. The first article I ever read about Fugazi was called "We Owe You Nothing," which is the first line in the chorus to this tremendously infectious track. And it turns out they don't even need three minutes to pull it all together. As Ian screams the last line, he not only brings it all around full circle, he renders the rest of the lyrics as merely preface: "You are not what you own."

"Blueprint" - It became a Fugazi tradition: on each record, there would always be what we would refer to as "Guy's slow song." While this track can't officially be labeled as such, it's planting the seeds for the ones that would follow. It starts semi-slow, builds, and ends with an MacKaye-Picciotto chant that seems to almost work as an addendum to "Merchandise": "Never mind what's been selling/ It's what you're buying." Though I've often wondered if this song isn't about major labels trying to woo the band.

"Sieve-Fisted Find" - What a great song title. I couldn't even begin to speculate as to what this track is about, but again, it doesn't matter. When Ian breaks it down on this one, singing a few lines after Guy handles the rest of the song, it's stirring and just great.

"Greed" - Again, Fugazi taking on a huge issue and distilling it down to the essence: "You wanted everything/ You needed everything/ Everything is greed." Not even two minutes long, and as good as any other song on this album. Ian rarely showed clear traces of his Minor Threat upbringing in Fugazi, but this song hearkens sweetly back to that simpler and overtly angrier time.

"Two Beats Off" - Guy Picciotto has a unique vocal style, and its effectiveness isn't exemplified any better than on this track. The rhythm and cadence in his voice playing off the uncharacteristically calm and tight riff in the verse is just too good.

"Styrofoam" - When MacKaye sings "We are all bigots/ So filled with hatred," it's hard to know exactly what to make of this blanket statement, but it makes for a great song. This has always been a favorite, a track that keeps teasing towards a payoff, and when it finally shows itself at the end, it's more than worth it.

"Reprovisional" - A reworking of "Provisional" from the Margin Walker EP, spruced up a bit and made to fit perfectly in this batch of songs. This was clearly one of the band's favorite tunes, as they played it live all the time. Classic Picciotto.

"Shut the Door" - The last song on the proper Repeater LP, and a track that couldn't have been anything but the closer. It's a lulling song with a huge chorus, and MacKaye outdoes himself with the quiet/loud juxtaposition throughout. By the time he calmly sings "Shut the door so I can leave," you should be spent.

"Song #1" - This is the first of the "3 Songs" originally released as a 7" and tacked on here for CD release. I've always loved this track, and also understood why it made a great single-type song. It's very declaratory, very upbeat, and more matter-of-fact with the lyrics than other Fugazi cuts of the same era. And awesome.

"Joe #1" - The second (though probably technically first) instrumental track named after a member of the Fugazi rhythm section, and another great one. Joe Lally: the absolute perfect bass player for this band.

"Break-In" - One of the all-time shortest Fugazi songs, and also one of the fastest. I've often wondered what this song is about, but never too hard, because I don't think I want to know. But I do know that I enjoy it, and that's quite enough for me.

If you don't own this record, I genuinely feel sorry for you.

"Sieve-Fisted Find"
Posted by Wockenfuss at 12:04 AM

This is my favorite record of theirs and still stands as one of my all time faves period. This album really motivated me to find more "underground" music at a young age as I was blown away by how perfect it seemed to me. Where as I loved Faith No More I really connected to Fugazi. If that sounds cheesy than so be it. But I loved their whole DIY, screw the majors thing that they had going on. While Nirvana talked it Fugazi actually walked it. Every song on here is incredible but the ones that really get me are "Styrofoam," "Repeater," "Merchandise," and "Turnover." When I was 14 I thought that "Shut The Door" was just about the greatest thing ever created ever. The drums on "Repeater" still perplex me. I swear there are two drums tracks happening. This is one of the records that I taught myself to play drums to (by jacking up my headphones and drumming along) and Canty's drumming on this one is incredible. His style, just as much as Lally's, really makes the band. For me anyways.