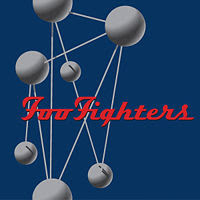 Right from the start, it's clear this wasn't to be the Foo's debut part II. What it ended up being was a bridge between the rough-but-rugged precision clamoring of their first record and the more pop-ready rock that they would represent after this. Of course, when this arrived in '97, we had no reference other than the previous album. So really, this one stood out mostly for being considerably more polished and featuring singles that seemed consciously radio friendly. I was still on board.

Knowing what we know now, this will always be, to me, the last great Foo Fighters record. At the time, it was a better follow-up to their debut than I feared they might come up with. I figured Grohl had stacked their first album with all the best songs he'd been working on during his years in Nirvana, and making a fresh run at continuing the success of the band might prove it to be a one-off after all. Not the case. What he came back with was something that hit as hard as the first record, but seemed more removed from the fading lights of grunge. This was the band setting out on its own, with Grohl seeming less like "the guy from Nirvana" and more like his own thing.

Maybe I shouldn't have liked "Monkey Wrench" and "Everlong," but I did, and I do. They were perfect singles for this record and for the time, and certainly showed that the band was capable of writing some semi-dense and mega-catchy songs. "My Hero" never really did it for me, but I think I was alone in that. There are a slew of other great songs on this record, as well. The one-two punch of "My Poor Brain" and "Wind Up" clean up the mess of the Tonic-sounding clunker "Hey, Johnny Park!" and make sure the album doesn't lose track of the rock. "Wind Up" is, for my money, one of the top five best Foo Fighter songs, and probably the best song on this record. The line "I want a song that's indelible like Manimal" gets me every time.

"Up In Arms" starts off like it's going to be this album's "Big Me," but speeds up and rocks the pop. Thankfully it stays short enough to not push it, because it lays that pop on pretty thick. "See You" is another short one that could almost be categorized as a novelty palette-cleanser in the middle, but it ends up being a tad better than that. "Enough Space" is a sci-fi themed Pixies-style rocker that really works, and it's followed by "February Stars," a ballad that starts soft, builds, and is probably the most forgettable song here.

"New Way Home" is a solid closer, but you can hear the mainstream rock sounds taking over. I had some fears about this when I was getting into this record, even realizing at the time that some of these tracks weren't really in line with what I normally listened to. But, it was Grohl; I figured I'd go along for the ride. I didn't know it would end here for sure, but I had a feeling.

I was looking at the Wikipedia entry for this album the other night (you know, doing my research), and the first lines read like this: "The Colour and the Shape is the Foo Fighters' second album. It was released May 20, 1997 through Roswell/Capitol Records. It is the best album ever." Those crazy kids. It's since been corrected, but it let me know I'm not the only one out there who still thinks this is a pretty damn good batch o' songs.

Oh, and this is another one you can put in the "great album/terrible album art" category.