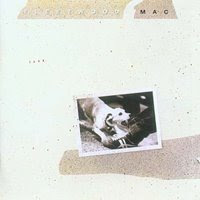 Don't we all have a soft spot for the Mac?

This remains the only Fleetwood Mac record I own (though there is a copy of Live on my shelf, but it must be the lady's), and things will probably stay that way. Sometimes I've felt like I should own a copy of Rumours just, you know, because, but I know I'd never listen to it. Fleetwood Mac is one of those rare bands where I have no real desire to listen to their music in my free time, but if it comes on the radio or the television, I won't switch the station. I thought their reunion show that aired on TV back in 2004 was fucking awesome. And, clearly, they're all assholes, especially Lindsey Buckingham, and this makes me like them more.

Which brings us to Tusk, one of the most praised, maligned, and famous-for-"flopping" albums ever. When you hear this many conflicting opinions about an album (and the murmurs that Buckingham was trying to go "punk"), you've got to check it out. My first exposure to the legend of Tusk was via Spin Magazine in 1991, where they had a short article about the "Ten Most Underrated Albums of All Time." (Quick side note: Spin used to be a great magazine. They did sweet lists all the time, way before everyone was doing them, and the fucking rag was my bible.) It was a great list, both in choices and the blurbs that accompanied the selections. This was it:

(I don't want to get into all their choices, but by declaring Paul's Boutique underrated before the Beasties were officially cool again, Spin proved they had their shit together.)

First off, seeing Spin mention Fleetwood Mac at all was just bizarre. They were one of the last groups I would have expected to see in those pages, especially being praised. My interest was piqued. As the years went by, I would always read little things here and there about Tusk, about how it was nothing like what anyone expected the band to follow Rumours with. That the record company was scared of it. That Buckingham almost lost his mind putting it all together. I was really intrigued, but I always forgot to actually buy it when I was record shopping. I finally picked it up for a dollar about four years ago, and it ended up not being what I expected at all.

Make no mistake; it's a great record, and every bit as good as people will tell you it is. Is it experimental? Not really. The songs that Buckingham wrote are the "weird" ones, and they're all awesome. They're slightly new-wavy, and if you listen to them on headphones, there's some weird shit going on around the edges of some of them. They end up being pretty fascinating. While the rest of the band was sticking with the tried-and-true sound of the Mac, it seems like Buckingham had taken this as an opportunity to flex his creativity and really crank out something new, and clearly people weren't ready for some of that. Which is great. It backfired for him them, but the revisionist history on this tells a different story.

This record also features some of the most elaborate (and arguably unnecessary) album art I've ever seen. It's pretty sweet. It's LPs like this that should convince you to buy a turntable if you don't have one. This is one of the best dollars I've spent in the last few years.

Make sure to sit through the entirety of this one. The last two songs are killers.

I feel the same way about the Mac. I like them but would never listen to them on purpose. Follow ups to massively successful albums always intrigue me. I am curious about the album artwork that you talked about. The cover is terrible.