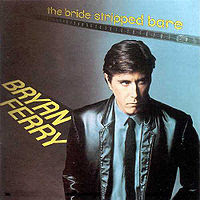 The "stripped bare" part is about right, or at least compared to some of Ferry's other work. These songs are more guitar-heavy, more urgent, and as close to pissed off as Ferry can get, though he still doesn't come close to losing his cool. There's still horns and keys, but the strings aren't nearly as dominant as they have been on some of his other stuff.

Like a lot his records, this is a mix of original compositions and covers, and as usual, the covers aren't phoned in. His version of "Hold On (I'm Coming)" is barely noticeable in the verses, and really only starts to sound familiar once the chorus kicks in. It's really well done. Ferry has a way, and I think this is part of his brilliance, of taking songs that you can't imagine him singing and arranging them in a way that allows his voice to fit perfectly. I don't enjoy a lot of cover songs, but I enjoy a lot of his.

"When She Walks in the Room" is a beautiful and bitter love song that allows Ferry to take some jabs at the naivety that breeds insolence in what must be his ex-girlfriend. It's definitely my favorite original song of his on this LP. His cover of "Take Me to the River" is slinky and pretty cool, but it's his random cover of the Velvet Underground's "What Goes On" that really lights up the second side of this one.

Man, I forgot how much I like this record. Time to get some more Bryan Ferry.