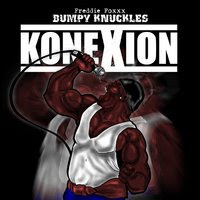 At some point, I remember Bumpy promising that he had a trilogy in the works. Konexion was just phase two, he said. Seeing that it took three years to get this record out, I decided not to hold my breath. Good thing, because his next record has never shown up. There's been mixtapes and lots of talk, but nothing substantial. Anyway.

Konexion isn't bad, but for some reason it just didn't seem as punchy and hard-hitting as his previous work. Although he pretty much nixed the skits on this one, starting the album off with "Interview w/ allhiphop.com" seemed stupid then, and still does now. It's only two minutes long, but it prevents the record from getting going. When it finally does, it seems Bumpy's beats are a lot more generic, and don't match the power of his voice.

One thing's for sure: he's not a lazy man. This is a deep album, going almost 75 minutes, and like I said, without much filler. But without memorable beats and with choruses that aren't really his style, I can see why this one was considered a disappointing follow-up to Industry Shakedown. I still have it. I'll keep it.

When it comes to Bumpy, I can always find something to like. Now where's that Amerikkkan Black Man record I've been hearing about for three years...?

"Mega Bomb Dropper"
Posted by Wockenfuss at 1:05 AM

I try so hard to like this one but it is just not that good. Honestly, there was no way he could have followed up "Industry Shakedown" and left me satisfied. DJ Premier's beats are sorely missed and Bumpy ruins some great songs with terrible hooks. Some of his raps seem less focused as well. I still go back to this one from time to time but it always leaves me disappointed.