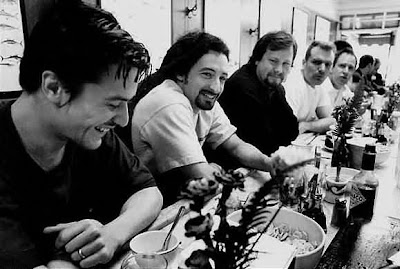 Sorry to interrupt the Fugazi fest, but if there was any news worth breaking up the party (other than the announcement of a new Fugazi record), this is it. After more than a decade, Faith No More has decided to give it another go. The official statement, taken from fnm.com:

Faith No More has always stood out as some sort of unique beast; part dog, part cat--its music almost as schizophrenic as the personalities of its members. When it all worked, it worked really well, even if the chemistry was always volatile. Throughout our 17years of existence, the mental and physical energy required to sustain this creature was considerable and relentless. Though amicable enough, when we finally split, we all followed paths seemingly destined to opposite ends of the universe.

Yet during the entire 10 years that have passed since our decision to break up we've experienced constant rumors and requests from fans and promoters alike. Nevertheless, for whatever reason, none of us kept in regular touch, much less to discuss any possibilities of getting together.

What's changed is that this year, for the first time, we've all decided to sit down together and talk about it. And what we've discovered is that time has afforded us enough distance to look back on our years together through a clearer lens and made us realize that through all the hard work, the music still sounds good, and we are beginning to appreciate the fact that we might have actually done something right.

Meanwhile we find ourselves at a moment in time with zero label obligations, still young and strong enough to deliver a kickass set, with enthusiasm to not only revisit our past but possibly add something to the present. And so with this we've decided to hold our collective breaths and jump off this cliff....
BACK, GOD FORBID, INTO THE MONKEY CAGE!!!

We can only hope that the experience of playing together again will yield results erratic and unpredictable enough to live up to the legacy of FNM.
Who know where this will end or what it will bring up...only the future knows. But we are about to find out!

I'm assuming this was written by Billy Gould, because he's always been the de facto spokesperson, but that's, as are a lot of things regarding this announcement, speculation. Let the fanboys congregate, and still, somehow, complain that Jim Martin will not be joining them. People are the worst.

Anyway, I can't help but think that my extensive overview of the band's catalog on this blog not only reinvigorated the fanbase, but reassured the band members that there is still fervent interest in the group's music. So, to the world I would like to say: you're welcome.

On a slightly more reality-based note, I'd like to say that while I'm excited about the prospects of the band reforming, we must remember that this was (is) a group that was notorious for their dysfunctional relationships, and I worry that maybe we should collectively wait to see how this all plays out before we start making our "'The Perfect Crime' rulez!" signs to take to the concerts. There are, as of right now, no North American dates scheduled, and this all still seems very preliminary.

But, I'm excited to have something else to write about in this blog, so expect more FNM news of the interrupting-the-flow-of-things nature as it is made available.

"Digging the Grave"
Posted by Wockenfuss at 11:04 PM

Reunion shows are fine but I really hope there are no future albums. Leave it alone. And please play somewhere close to Arizona.