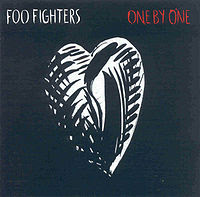 I make it sound like a clean break, but I kept giving the Foos chances. I actually picked up There Is Nothing Left to Lose on vinyl, but I couldn't hang with that "Learning to Fly" bullshit, so I eBayed it and made my money back, while making some fanboy happy because it still contained the original temporary tattoo that accompanied early pressings of the record. I was happy to get rid of it, but also sad to admit I didn't like the band anymore.

Which brings us to this one, which I don't remember how I acquired. I think it was either dirt cheap or free, because I know I didn't rush out to buy it. I may have thought "All My Life" was a badass song when I first heard it, maybe that's why I wanted it. I got sick of that one pretty quick, and when I heard songs like "Have It All" and "Times Like These," I officially felt embarrassed for owning this. "Times Like These" manages the once-thought-impossible feat of out-sucking "Learn to Fly," and sounds like it was not much more than an audition for sports and graduation montages everywhere.

I ended up thinking "Halo" was an OK song, but mostly because it sounded like Grohl trying to be Gerry Rafferty and pulling it off. Tracks like "Overdrive" and "Burn Away" sound just as phoned in as their titles, and I kept getting the impression that Grohl just wanted as much TV time as possible, as all the songs were beginning to be way too accessible and less and less what anyone would consider "edgy." Maybe the Foo Fighters never were edgy at all, and I'm the loon. That's probably partly true. Either way, it's been sort of sad to see them turn into the band that your co-worker who has shitty taste in music likes, but I guess that's the way it goes.

They had a good run.