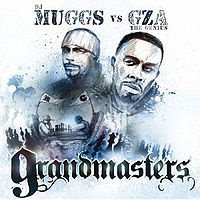 I wish I knew more of the back story behind this disc, though maybe it's nothing more than a couple of dudes deciding to do an album together. I purchased this within the last year, and though I'm not intricately familiar with it, I've been listening to it quite a bit lately.

And here's the thing: I like it, but I don't love it. When you see that two guys who are infamous aces at their crafts have decided to do a record together, you have to prepare yourself for precision. It's odd that this is exactly what this album lacks. GZA's verses, while filled with some lyrical gems, feel rushed and sometimes unfinished. As I've said before, he set the bar so high with his early material, that it becomes all too clear when he's not giving it his all. I'm not saying he's lazy on these songs, but they just don't fit as tightly together as some of his other work.

The same can be said for Muggs' production. The beats seem initially solid, but the majority are just short loops repeated ad infinitum. I always find myself waiting for the next section of the song (or even slight variances in the main beat), and it rarely comes.

Having said that, this record is far from bad. If it was from an unknown duo, I'd definitely be less harsh with my criticisms. The fact that it feels rushed is just, like I said, very incongruous with the rest of their work. (Although, in fairness, I haven't heard anything DJ Muggs has done since the mid-90's, so maybe this is his style now.) It's also strange considering this album has a loose chess thematic, which also feels only half-realized.

RZA and Raekwon show up on "Destruction of a Guard" and "Advance Pawns," which are both strong tracks. And Masta Killa and Prodigal Sunn both turn in strong verses on "Unstoppable Threats." "All In Together Now" might be my favorite track, featuring RZA and an uncredited chorus from ODB. So yeah, there's a lot to like here. There's just not a lot to love to the point of repeated listening.

"General Principles"
Posted by Wockenfuss at 12:29 AM