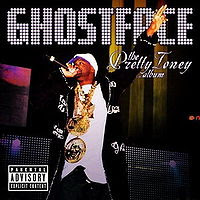 Yup, no "Killah." Like that's what was preventing Ghost from becoming a top 40 star.

This is probably the Ghostface Killah album I've listened to the least, though as I'm listening to it now, It's coming back to me. When I think of Ghostface, this is not the record that immediately pops into my head. Maybe it's the absence of Raekwon (or really any of the Wu), or maybe it's that this one just never clicked with me. While this isn't a blatant attempt at getting some radio play (a la Method Man's Tical 0, released at roughly the same time), the vibe is there. Not only in the absence of "Killah," but in the corny album cover and the Missy Elliott feature. There's also random guest spots from Jadakiss, Styles P, and Sheek Louch, which don't really go anywhere.

The conspicuous non-presence of his Wu brethren may have seemed, in his own mind, like Ghost was trying the waters on his own, like he was ready to break out as a top biller. It's this sort of thinking that has always made me certain that the members of Wu barely understand their fans. While they're all great MCs on their own, it's their collective mentality and complementing of each others' skills that was always their greatest asset. And I've never understood how they didn't see that. As soon as they started having outside (the Wu-fam) guest on their records, things started going downhill. I don't see how they never put that together. Anyway.

Ghost has never had a problem dominating a song by his lonesome, and he turns in some gems on this one. The 1-2 punch of mini-song "Kunta Fly Shit" and the badass "Beat the Clock" is tough to beat. But after that, things get a little stale. This record begins really strong, and there's some choice cuts towards the end, but the middle (and even some of the second half) is muddled by the fatal R&B bullshit and some too-long skits. I won't go on my skit tangent again, but really, once it reaches the minute mark, it's time to end it.

The song with Missy Elliott is embarrassingly terrible, and the most obvious attempt here for some club love. As a guy who followed Ghost from near the beginning, this shit bothers me (as it did with all the Wu dudes) because we thought they were better than that. We were wrong, and opening up the CD to see order forms for Ghost merchandise and autographed photos made that even more clear.

I guess it goes along with what I see as The Packaging of Ghost on this record, and while I do dig some of the cuts here, I can't say I approve of the record as a whole.

You pretty much nailed it with this one. This is Ghost's sad attempt at top 40 success, something which he has no attempt at achieving. The iPod has saved this album for me. After eliminating the radio songs and skits it becomes a pretty decent 11 song album. This album has always frustrated me as it is either real on or real off. I have 6 songs with 5 stars, 5 with 2 stars and the rest don't qualify. It is feast or famine. That being said "Holla," "Be This Way," and "Biscuits" are some of the finest Ghost songs ever. "Tush" has to be the worst.