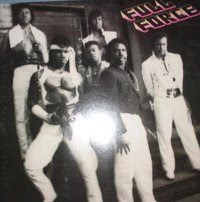 It must be discouraging for the members of Full Force to be recognized more for being the "I smell pussy" guys from the House Party films than for their music, though I doubt they get recognized much at all anymore. I guess they can keep crossing their fingers for that Lisa Lisa and Cult Jam comeback...

This LP was a gift from my brother (based solely on the cover), and it's always been more fun to look at than listen to. Every time I play this record, which isn't often, I am utterly amazed at how bad it is. And not bad in a strictly dated sort of way (though that is also a problem), but musically, as well. It's some of the most basic music you can imagine, and the fact that it took six dudes to put it together is astounding. It sounds like they just chopped up the drums from Billy Squier's "The Big Beat," fed it into their drum machine, had somebody who could barely play drums make some really basic loops, and then took turns dicking around with vocal parts. It's brutal.

But, like I said, you can't beat that cover. You also can't beat Bow-Legged Lou, and his line from "Unselfish Lover": "I'm comin' inside your love."