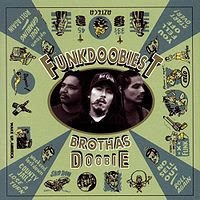 I've been listening to this album, trying to convince myself that Funkdoobiest didn't fall way off after their solid debut, but I'm having a hard time doing that. I've only owned this CD for maybe a year, and each time I listen to it, I remember why I stopped listening to it the last time I started.

Neither do the stoney beats he's rapping over, as they sound more like unused Cypress Hill interludes than the uptempo tracks that made their debut album so much fun. By the time they break out the solid "Who Ra Ra," the album's over and it's too late to save it.

It's a damn shame to see Sun fall into the same bullshit that everyone else was harping on, especially when he had managed to come out the gate with something different.

Cdog used to bump this album non-stop back in the day so I think I have actually heard it more than the first. That being said I always found it okay at best. Although listening to "Pussy Ain't Shit" in a car full of 16 year old boys was always a good time, which says something for the intellectual level of this one.