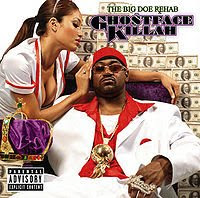 Despite having the worst album cover in Ghost's catalog (I was going to say in Clan history, but Cappadonna's The Cappatilize Project has it beat), this album is musically solid.

After the routinely pointless intro, the album kicks off with an odd choice, the decent "Toney Sigel aka the Barrel Brothers," featuring Beanie Sigel. It's not a bad song, just an odd one to start with. Things get started for real after that, with the great "Yolanda's House," a linear tale featuring Raekwon and the scene-stealing Method Man. "We Celebrate" is a song that's been made before many times, but it makes for an OK club jam, if that's what he was going for. Kid Capri's yelling makes it hard to listen to more than about once a day.

The album keeps it smooth after that, taking the slightly mellow route with "Walk Around" and "Yapp City," on which Sun God and Trife make some sweet moves. "White Linen Affair" almost ruined by Shawn Wigs' stand up routine, but Ghost controls most of the track, so it's not complete crap. The smoothed-out R&B just keeps going after that, with Raekwon and U-God helping out on "Rec-Room Therapy," and "Shakey Dog Starring Lolita" which must have something to do with the track "Shakey Dog" from Fishscale, but I can't figure out what. Odd, but that's Ghost, I guess.

A gang of Wu dudes show up on the sweetly named "Paisley Darts," and Method Man once again outshines 'em all. It's great to hear Cappadonna on this one, too. "Killa Lipstick" is better than the title would indicate, as Method Man works the chorus while joined by Masta Killa for some synthy sex-you-up shit. As usual, the worst track is the last one, and this time it's labeled as a "bonus track" (I guess "Killa Lipstick" is, too) called "Slow Down." It's not terrible, but it ain't great, either.

Ghost kept the skits to a minimum on this one, and it helps the record flow smoother and keep things moving. This is his most mellow album, though he still manages to spaz out in spots. I haven't revisited this one as much Fishscale over the past few years, but it's still nice to go back to.

Here's what Ghost had to say to his fans after the record failed to sell well in its first week. "Whateva whateva."

And that's it for our time with Ghostface Killah. Not a bad ride.

"We Celebrate"
Posted by Wockenfuss at 1:11 AM

I love this album. Of course in my iPod I have taken out all of the skits and intros and stuff and so it comes off as a real solid record. There are no crummy songs here. I agree that the opener is a real odd choice. "Yolanda's House" is one of the best Wu songs of the last few years. It is pretty perfect. Method Man is the key to the Wu and the Wu are the key to him. He brings is real A game when featuring on Wu songs and in turn the other rappers try to compete with him. "Yolanda's House" is a great example. Ghost's verse is awesome and then Meth comes in and somehow one ups him. Heck, even Raekwon sounds somewhat interested, which is pretty good for him these days. Shawn Wigs once again proves that he has no business handling a microphone, let alone one that has been held by the Wu. I feel embarrassed for him due to just how bad he is on this record. "Paisely Darts" is an incredible tune. Its funny, "Slow Down" is one of my favorite songs on the whole record. The beat is great, the way it awkwardly switches up, and for some reason I like the girl singing on this one. Ghost's verse is odd as the chorus is about how life is short and he mainly raps about spending tons of dough, although he seems to be rationalizing it. For me I think it is a pretty interesting little number, although I may be putting too much thought into it. What I really dig about this record is there is no obvious attempt at a crummy radio song. As far as complaining about album sales, posing on your album cover surrounded by stacks of money usually doesn't motivate people in a recession to drop 15 dollars on your album. That's just me. Also, the number he quoted, something like 100,000 in one week, seems like a pretty healthy number to me in today's music world. Whatever. Its still a great album.