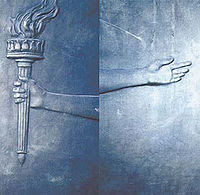 The final Fugazi studio LP, or at least the last one before their still-standing "indefinite hiatus." I don't remember knowing that this would be their last go of it, but it did seem they might be winding down. Some of the members were starting (or adding to) families, and they had been at it for a long time. I can't recall when I heard the official announcement they were disbanding, but I remember being disappointed but not upset. If any group had earned some time off, it was these guys.

If this ends up being the final Fugazi record (and all signs are still pointing to the idea that it will be), we can say without uncertainty that they left us on a high note. Released during the immediate post-9/11 turmoil that had the nation in a frenzy, this album seemed almost a calming message from a group who probably found themselves right in the thick of it. Of course, the songs were recorded months earlier, but the subject matter still seemed not only classically Fugazi-esque, but hyper-relevant. But, that's nothing new. While the tracks are among their most intricate, their anger and frustration are still palpable.

This still seems like the perfect Fugazi record for the new millennium, as corny as that might sound. They sound tight, focused, mature, and still head and shoulders above any band you could name. The songs have become longer, and so have the lyrics. This isn't to allow more room to speak their minds necessarily; it's also just what happens when you're writing songs with lots of individual sections. It's another progression by a band that was never happy to make the same record twice. And while this does seem as the next logical step after End Hits, I don't anybody saw the cello coming.

"Intro" - Still not sure why they bothered to list this as track one and not title it, but that's the deal. I didn't mean to make it sound like there's cello all over this record, but you can hear it here, along with what sounds like a TV or radio.

"Cashout" - Is it possible the band had never addressed homelessness before? This track almost sounds like MacKaye read something in the news and was inspired to write a song about it, though it might not even be that complicated. Again, a poignant take on a tough issue. The verses are almost soft, but the chorus ranks amongst their biggest. The cello helps, lending a weird jaggedness to the bulkiness of it.

"Full Disclosure" - Vintage Picciotto, a song that sounds like it could have been lifted from the In on the Kill Taker sessions. The harmonizing and guitar riffage at the end verges on being (gasp!) poppy, but they wrench it all apart before it's over.

"Epic Problem" - This song really threw me off when I first heard it, due mostly to the telegraph-ish lyric scheme ("Congratulations. Stop."), but as soon as I stopped worrying about that, I couldn't get enough of it. The ending is its own little thing, and one of the most memorable little parts of the whole record:

I have no idea what that means, but I like it.

"Life and Limb" - "Hey - we want our violence doubled." Picciotto sways through this song and almost mumbles his words, but it all completely works. The female backing vocals are a nice touch, and somehow don't sound completely out of place.

"The Kill" - Slow and somehow menacing, Joe Lally takes another crack at it, and this time he employs Ian for the chorus. Of course the lyrics are great, and though it's a little long, it's not tedious. It's a really loose song, but I think it works.

"Strangelight" - From the first few seconds of this song, you would never know it's a Fugazi song, but when the guitar comes in, you know it instantly. This is Guy's "slow one," though it eventually speeds and gets a little feisty in the second half. Probably not my favorite song on this record, but I like it.

"Oh" - Picciotto again, and this time he's flexing upset over a bare-bones track. It's not the first Fugazi song to comment on corporations, but it's not a bad one to add to the list. Contains the line "I'm pissing on your modems," which is sweet.

"Ex-Spectator" - I don't know how Brendan Canty gets his drums to sound like that, but damn, it's nice. MacKaye sounds plenty pissed on this one, and he completely makes the song. The hammering pre-chorus guitars sound positively Repeater.

"Nightshop" - A strange melody for Picciotto, as it seems both really straight ahead and stumbling, maybe due to the fact that it doesn't sound like the stuff he usually sings. They lyrics are great, and though I don't love this song, I do like the way it switches directions.

"Argument" - Not nearly as epic as some of Fugazi's previous closing numbers, but a tremendous song nonetheless. As soon as you realize it's not going to completely explode (we've come to expect this over the years), it's pleasant to sit back and enjoy the ride. The track does get a little juiced up at the end, and that seems like just enough to go out on.

So yes, this record is a bit different than the band's previous releases (no songs in the two-minute range?), but that's what makes it great. I fear that it may not have as much staying power as some of their other ones, but it certainly fits into their catalog nicely.

And don't worry, we're not quite done...

"Cashout"
Posted by Wockenfuss at 5:35 PM

This is another one of those records that I wish that I knew better. I know it but I don't KNOW it. "Cashout" is a great song but is not necessarily a great opener. There are no flat out rockers here, which is kind of a bummer. I just have never fully given myself over to the more mature, subdued stylings of Fugazi here. They don't sound angry. They sound defeated. That being said I still enjoy the record but not a lot sticks in my head.