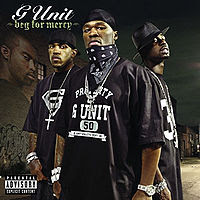 I bought this CD while still fully embroiled in my admiration of 50 Cent, and although I really didn't care for the rest of the G-Unit crew (still don't), I ended up really liking this record (still do). There is still a part of me, though it doesn't show itself nearly as frequently as I grow older, that has a hard time resisting some well-made gangsta rap. It's the same reason I liked 50 Cent's first record so much, and it's the same reason I like this one.

Honestly, I think I was just shocked that this album was any good at all. It followed pretty closely on the tail of Get Rich or Die Tryin', and I wasn't going to be surprised if Fiddy had already blown his load the first time around. Turns out he hadn't, and this record, while a bit different than his debut, made for a solid showing and accomplished his goal of introducing the other G-Unit dudes to the world. I've learned to tolerate Lloyd Banks and Young Buck, but I still can't stand Tony Yayo. So, his incarceration during the recording of this record worked out well for me: he's only on two songs.

This is a deep record, spanning 18 songs over almost 70 minutes, with (thankfully) no skits. So yeah, there are a few clunkers towards the end, but the good manages to outweigh the bad. And when I say "good," I have to refer back to my need-for-gangsta-rap statement. This allows me to overlook track titles like "Gangsta Shit," "I'm So Hood," "Betta Ask Somebody," and the handful of other generic names that get reprise on this disc. I'm not looking to G-Unit for originality. I'm looking to them for solid beats under lyrics about killing you in front of your family. And they deliver that in spades.

Full disclosure: this is my go-to album on my iPod when I lift weights at the gym. Feel free to think less of me for that.

"Poppin' Them Thangs"
Posted by Wockenfuss at 2:41 AM

That's funny, I always listen to "gangsta" rap when working out also. I have always been ashamed of my secret need for gangsta rap. Maybe it is an unavoidable byproduct of growing up on the West Coast. Who knows? All I know is that I never skip a song by Daz Dillinger when he comes up on the shuffle. I still can't stand Fiddy though. He sounds "challenged" to me. Wu-Tang!