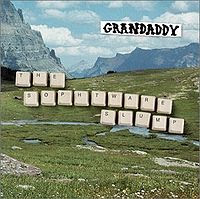 Huh. I guess this is the only Grandaddy album I have. I should have more, but what are you gonna do.

This is one of those records where I look at the track listing and convince myself I have no recollection of what any of these songs are, and then I listen to 'em and I remember every single one. I used to listen to this disc quite a bit, and I still think it's great. I saw these guys live a few times, and their ability to recreate these fairly complex sounds on stage was really impressive. Jason Lytle's voice is really distinct, and so are his lyrics, and the band certainly has their own sound.

Starting this album off with the almost nine-minute "He's Simple, He's Dumb, He's the Pilot" is a bold move, but one that totally works. The song feels like about three different songs, and this whole album really bleeds together, so it doesn't matter. I think "The Crystal Lake" was one of the singles from this album, but it's really one of my least favorite songs here. Tracks like "Miner at the Dial-a-View" and "Jed the Humanoid" are really where it's at. They're slow and stacked in layers, with a lot of shit going on.

Any attempts to decipher the meanings behind the lyrics on this album would be fruitless, so I won't bother. I may not really understand the concepts, but I love the words that are sung. And the melodies that roll with them are just as strong. And the best part: this is one album you and your chick can agree on.

"Hewlett's Daughter"
Posted by Wockenfuss at 2:16 AM

Wow. I listened to the crap out of this album when it came out. "Hewlett's Daughter" is still one of the catchiest songs I have ever heard. I pretty much agree with your review, but I do dig "The Crystal Lake." I was also surprised that you left out "Jed's Other Poem," which is another favorite. "Miner at the Dial-a-View" is just an insanely good song and I was always amazed at how well they pulled it off live. The things I loved about this one at first (the variety in the songs' tempo and themes, the long opener, the slow builds) have actually caused me to like it less as the years go. Not because its bad because I have heard it too much. In contrast, "Sumday," their later album, is a little more straightforward and still gets rocked pretty regularly, although "Sophtware Sump" (awesome album title by the by) is probably the better album. "Under The Western Freeway" trumps them both in my book but that is for another day.

Oh, and your last comment is true. My wife loves Grandaddy.