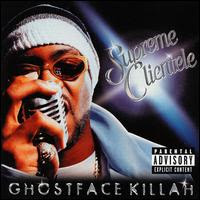 I always forget how much I like this record. I don't know why. I've always enjoyed it. It's one of those albums where I put it on, and next thing I know I've listened to the whole thing and remembered exactly why my copy isn't in great condition: I've listened to this album a lot over the years, and it's still great to come back to as the turning point in Ghost's career.

Ghostface Killah was in the same spot as the rest of his Wu brethren, having dropped a RZA-fied solo debut that was well received, and then trying to figure out how to follow it up without RZA as the mastermind. RZA does provide four of the beats on this record, and they're each entirely different from the other, and all great. The rest of the production is handled by some familiar (Inspectah Deck, Mathematics) and not-so-familiar (Black Moes-Art, Choo) names, but the diversity in the beatmakers seems to really work on this album. I don't know if Ghost has an ear for beats or if he just got lucky, but the music here (and the sequencing of the tracks, for the most part) is spot-on.

But the real powerhouse here is Ghostface. His approach is less bombastic than it was on Ironman, and his maturity lends itself nicely to the overall feel of the record. He also wisely employs a gang of Wu-related guests, and this allows tracks like "Buck 50" and the essential "Wu Banga 101" to qualify as some of the best Wu-related cuts of the era (again, Method Man just slaying it). This isn't to say Ghost has lost his vigor; far from it. He and RZA go nuts on "The Grain," and it's one of my favorite songs on the record. The same can be said for the completely left-field single featuring U-God, "Cherchez LaGhost," a track that was mildly huge at the time, but should have been even bigger.

"Child's Play" accomplished, for me, what "All That I Got Is You" couldn't, relating a childhood tale that was actually fun to listen to. "Nutmeg" and "One" are great openers, tracks that didn't sound distinctly Wu-Tang or Ghostface-esque, but working really well nonetheless. Ghost also rolls through a handful of sub-two-minute tracks that make for nice little mini-songs.

The only thing to really count against this one are the skits, which are all too long and highly unnecessary. (This is excluding the "Iron Man" cartoon bits that run throughout the album, which are short and fun.) I don't want to go through each one, but this is another record where, if you have the power, I suggest leaving the skits off when you transfer it to your iPod. Nothing can kill a sweet mix like Raekwon's asinine "Clyde Smith."

Raekwon's Immobilarity came out a little before this record, and was pretty much terrible. When Ghost's album came out and was good, there was a sense that things had shifted. Ghost was all of a sudden the Wu member with some staying power on the solo tip, and he was ready to flex it. This was good and bad, which we'll get to in the following entries. But I want to point out what Ghost did on his second album that Raekown didn't do on his, all of which I feel are directly related to his album being unequivocally better:

He got RZA on board, even though it wasn't for the majority of the tracks.

He got a gang of Wu-Tang guys (the real ones, not the American Cream Team) to guest on the record, showing both solidarity and a distinct lack of egotism.

He asked Raekwon to be on the record (Ghost is conspicuously absent from Immobilarity).

He named the album something cool, and chose not to make up a retarded acronym that no one gave a shit about.

If he believed his own hype, he didn't get wrapped up in it, and was clearly out to prove himself again.

And he did just that.

"Cherchez LaGhost"
Posted by Wockenfuss at 2:40 AM

At a time when I was getting used to being disappointed by the Wu ("Immobilarity," "View From Masada," "Tical 2000"), I actually went into this one with lowered expectations. From the opening seconds I was hooked. Ghostface is out to prove something on this one. He makes almost all of the right decisions here (the skits are horrendous) and really sounds like he has something to prove. Your review pretty much summed up my feelings on this one but you didn't mention "Mighty Healthy" or "Apollo Kids," 2 of the best songs in the entire Wu catalog. "We Made It" is just an awesome song as well. This one frustratingly proved that they were still capable of turning out a great album. However, this has happened only sporadically since.