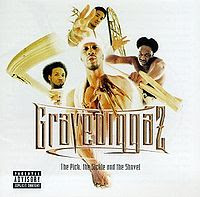 This album is at least notable for having one of the sweetest covers and titles in 90's hip hop. So, you know, it looks good on my shelf, even if I haven't listened to it in years.

I never had a copy of the first Gravediggaz record (though I had certainly heard it), so diving right into this one was a little rough for me. I was in the midst of my Wu-Tang obsession, so I was leaping to purchase anything the RZA had to offer. This record turned out to be unlike the first Gravediggaz album or anything the Wu was doing at the time, and while that threw me off and probably disappointed me initially, it's made it a great record to come back to over the years.

It's thick with lyrics, weird with the beats, and just dense as shit. So, while it's not really a record you'd put on when there's a lot of people around, it's a great one to drive alone to or clean the house to, etc. There's a lot to take in, and processing it all is sometimes a chore. For some reason, I have fond memories of listening to this while driving in the dark on the freeway in the rain. It's quite effective in that scenario.

The real gem here (no pun intended) is "Twelve Jewelz," one of the finest RZA-vocals-only songs in his personal history. Witness:

There's an intro and outro, but no other skits, and at about an hour, this is album feels pretty long sometimes. But there's some solid tracks towards the end, like "Repentance Day," which features guest spots from Killah Priest and Hell Razah, and "What's Goin' On?," a spooky track with a sweet beat by RZA.

It may not be for the casual listener, but there's some great stuff to be found here if you have the patience. Oh, and I'm still trying to figure out what Prince Paul did on this record.

"Dangerous Mindz"
Posted by Wockenfuss at 3:31 AM

I could talk for days about this one. I love this record. The weird thing about this one is it is where the group starts to fall apart. Where on the first one all 4 have equal input, the contributions here are all over the place. Prince Paul had nothing to do with it aside from producing one song. Why he is on the cover is beyond me, aside from he was the one who created the group in the first place. Rza, who was in his creative prime in '97, is frustratingly on only about half of the songs. The songs he is on are all great and some of the greatest raps he ever wrote in his career are on this record. "12 Jewelz" to me is one of the greatest raps ever written and his verses on "Dangerous Mindz," "What's Goin' On," and "The Night The Earth Cried" are all incredible. The rest is up to Grym Reaper and Frukwan, and while I think they are great emcees some of their weaknesses show up on the tracks with just them. "Fairytalez," and "Da Bomb" are two prime examples of songs that could have been improved with either Rza or Prince Paul's input. Seriously though, Rza steals the show on this one. This album is dense but in a good way. I somehow never get tired of it.