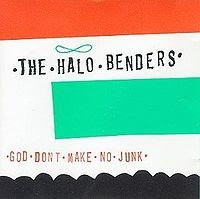 Ah, don't we all miss the days of the indie rock supergroup?

I would think The Halo Benders probably looked simultaneously like a brilliant and terrible idea on paper. Having Calvin Johnson and Doug Martsch handling lead vocals (with plenty of overlapping) is like pairing Barry White with Prince. (Well, not exactly, but you see what I'm getting at.) And while they certainly weren't everybody's cup of tea, I don't think anyone could have predicted they would have been this good, or that they would end up releasing three full LPs.

If you can't handle Calvin's style of singing (it took me a while the first time I heard the guy), you're going to have a hard time with this. Martsch's vocals are haphazard at times, but always slight and delicate in his inimitable way. Johnson's are heavy and ostensibly lazy, deep-throated and initially jarring in their static delivery. The closest he ever comes to deviating from this method is on the brilliant "Will Work for Food," and even then, there's only a slight inflection shift in his vocals.

If you can get past everything that feels initially awkward or uncomfortable about the sound of this band, you'll quickly realize those same things that troubled you are the aspects that make it great. When Martsch and Johnson really tag-team the vocals on songs like "Snowfall," "On a Tip," and "Big Rock Candy Mountain," the juxtaposition ends up being the stuff that real pop genius is made of. On a few of these songs, they obviously both wrote separate parts, put 'em together, and just let it ride. While it does feel a bit cluttered the first few times you hear it, there becomes a nice middle ground after you make peace with it. It is weird, but it's a really warm and pleasant weird.

"Don't Touch My Bikini" may be the most well-known song on this record, but it's also the one that wears thin the quickest. The rest of the album rates incredibly high on the replayability scale, especially when you consider the whole thing is barely a half-hour in length. Honestly, that's been my only beef with this LP over the years. It's just not long enough. But, I think they did a good job of keeping the tracks at a nice length (this was before Doug Martsch became the long-song king of the NW), and like I said, it makes 'em hard to get sick of.

Yep, this is probably another one o' them love-it-or-hate-it bands. But if you love it, you'll love the shit out of it.

"Don't Touch My Bikini"
Posted by Wockenfuss at 2:22 AM

Did I give this vinyl copy to you? I don't have mine anymore and I have no recollection of what I did with it. I may have sold it after I bought the CD. Anyways, I love this album so much that I have owned it on all 3 formats. There isn't a bad song. There isn't even a decent song. They are all incredible, mixtape worthy tunes. How many albums can you say that about? The first time I saw Built To Spill they played "On A Tip" and it was awesome. It confirmed my suspicion that some of these songs came in already written and the other dude just rocks his own part over it. For my money, "On A Tip," "Canned Oxygen," "Sit On It," and "Will Work For Food" are some of the greatest "indie rock" songs of all time. And choosing "Snowfall" as the opener? Genius. Built To Spill's version of "Scarin" also gives me goosebumps.