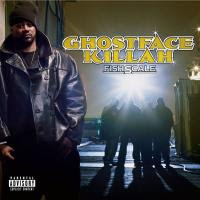 Turns out Ghost didn't need RZA after all. Huh.

There was buzz around Fishscale way before it came out, thanks in part to a slightly different version (than the final product) floating around the internet in the months preceding its actual release. I have to say, the positive word on the street got me a little excited. Around this time, the Wu was really starting to feel irrelevant. Even Ghost, the reliable MC when the others weren't, hadn't really blown everybody away with Pretty Toney. So when word started to spread that his new record was a return to form, I really hoped that it was.

I hadn't even purchased a new Wu-related album in years at this point, but still held onto some hope that it wasn't over. U-God's Mr. Xcitement (released about six months before this one) wasn't altogether terrible, but some songs on it were, and it was becoming typical of the Wu's output. A lot of the releases were directionless, trying in vain to blend disparate influences, but still managing to retain shards of original brilliance. It was frustrating, and made it hard to want to invest time or money in the dicey albums.

Ghost, much like he did with Supreme Clientele, reinvigorated the Wu faithful and brought some new fans into the fold. While Fishscale isn't on par with Ironman, it's arguably as good as Clientele, and certainly a step forward from The Pretty Toney Album. Ghost sounds excited to be back to his fantasy-driven coke-slangin' life, blazing through the crime scene footage of "Shakey Dog" like he's still jacked up from the rush. When he yells "The moment is here/ Take your fuckin' hood off," it's go time. "Shakey Dog" was one of the best Ghostface Killah tracks in years, and it was a perfect track to kick off this record with.

The coke life continues on "Kilo," where Ghost declares in the prelude that he can't feel his face, before he and Raekwon almost get the vibe back that they nailed on Cuban Linx. While most of us thought the cocaine shit was played, it was nice to hear that Ghost and Rae could make it work again. The record just barrels through after that, with "The Champ" rocking some Burgess Meredith-esque interludes and a huge beat. "9 Milli Bros." is triumphant, managing to not only resurrect Ol' Dirty Bastard, but also assemble the entire Clan, including Cappadonna. "Y'all be nice to the crackheads!" Fucking awesome.

Damn, I'm scanning through these songs, and it's hard to find a real weak spot. "Back Like That" is a blatant radio single, but it's nowhere near as pandering as some of Ghost's other attempts at mainstream success. And it worked better. As usual, there's some iffy skits, but even those are scaled back a bit on this one. This record bangs through the entire midsection, peaking with "Dogs of War," a fierce jam featuring Raekwon and Theodore Unit.

In another "as usual," things peter out a bit in the end, with a few R&B-heavy tracks and an unnecessary appearance from Notorious B.I.G. But really, by that point, Ghost has already made a great record. There are 24 tracks on this, and with this sort of deepness, a few slower numbers to wrap it up almost seems like a nice comedown.

I had this thing jammed in my car's tape deck for the whole of 2006, and I'm having no trouble remembering why. If anyone thought that Ghost had slipped a bit with Pretty Toney (guilty!), this was meant to silence the naysayers (it shut me up).

Apologies to my girlfriend, who was so sick of the sing-songy chorus to "Kilo" at one point that she almost lost it. Sorry, babe. I gots ta do what I gots ta do.

I love the deepness of this album. I have heard it 100 times and feel like I still really don't know it. This one especially sounded so good coming after the disappointing "Pretty Toney." This is an ALBUM, something a Wu member had failed to deliver in quite a while (save for "No Said Date"). Even the radio song, "Back Like That," is decent for what it is. "9 Milli Bros" and "The Champ" are simply monumental. Also notable is Shawn Wigs begins his reign of mediocrity here. He is so out of his talent level that it makes me feel sad for him. Dude is somehow worse than Remedy.