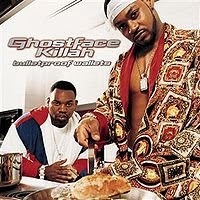 Ghost's third album, also known as the record with the most fucked track listing in history. Not only are the songs out of order, there are tracks listed that didn't even make it onto the record. Someone really should have been fired for this debacle.

Despite these problems (and the iffy album title), Ghost turns in another solid effort this time around. Maybe not quite as good as his first two, but he stays the course, churning out some of his most nonsensical raps and telling, as always, some good stories. Raekwon's on the front cover with him, but actually doesn't feature too prominently on this record. After helping Ghost fail at recreating the classic Cuban Linx beginner, "Striving for Perfection," on the intro, he recedes somewhat but delivers some decent verses on a few tracks.

Also present are members of Theodore Unit, Ghost's posse of hangers-on who actually aren't too bad. The track "Theodore" features one of the funniest choruses on the whole record, though it's not supposed to be. Anybody except Ghostface delivering it would have rendered it useless, but he makes it work. "Flowers" is a solid Wu cut, produced by RZA and featuring Raekwon and Method Man. The Ticalian Stallion again proves that he is the best one-verse man in the game. Easily.

If this album suffers from anything, it's the unnecessary forays into some serious R&B bullshit. "Never Be the Same Again" is almost tolerable, "Ghost Showers" pushes it, and "Love Session" holds the title as worst Ghost song with the worst title to boot. To make it worse, Ghost teases us with "Street Chemistry," a slow but steady track featuring Prodigal Sunn and Trife Da God that cuts off two minutes too early. Eh, it's still a nice little number.

Overall, I consider this a good listen. I've been bumping it for the last few days, and while I cringe every time I hear the chorus to "The Juks" ("Pop your collar/ Get your dollars"), I still dig the verses. That seems to be the case with this album as a whole. Even on those bullshit R&B tracks, Ghost has some solid wordplay, and he makes a good case for sitting through the crummy hooks.

Trying to nail down Ghostface Killah's approach to making a record at this point was tough. He might have developed a taste for mainstream success following his previous effort, but he must have still known he needed to satisfy his most ardent fans. He tries to do a little line-toeing on this record, and the results sometimes seem a little jumbled. But, if you're looking for a Ghostface Killah record to make perfect sense, you're going to be sorely disappointed every time. It's best to just let it ride and take it all in, internally noting the parts to focus on.

At least, that's what I do.

"Never Be the Same Again"
Posted by Wockenfuss at 2:09 AM

I was nervous when this came out so soon after "Supreme Clientele." I was partially correct. "Ghost Showers" is an obvious attempt at remaking "Cher Chez La Ghost," and just ends up being lame. "Never Be The Same Again" has a great beat, great lyrics, and a horrible chorus. "Love Session" is unlistenable to me. There are some great songs here, "Flowers" is a great Wu song. "The Hilton" is awesome and I have always wished that it was the opening track. The rest is comes close to great but never quite gets there. This is also the first Ghost album to feel like it was hampered by the always dangerous "studio pressure." Oh, and the sequencing of the record feels like it was pulled out of a hat.