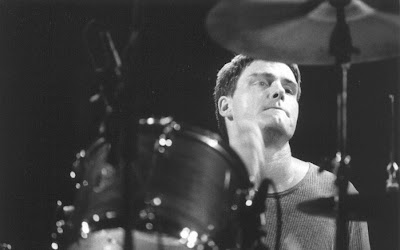 I realized about halfway through my dissection of Fugazi's records that I wasn't mentioning their drummer nearly enough. While this is at once a meager attempt to make up for that, Canty is a purebred stallion anyway, so it may have been inevitable.

It's hard to fully explain Brendan Canty's contributions to Fugazi, because I'm not sure we're completely aware of them. While he is an incredible drummer and owed just as much credit for the band's unique sound as any of the other three members, I've always been under the impression that he had a lot of input in the songwriting, too. Maybe we'll never know the whole story on that front, but I do know this: watching the man behind his drum kit was always one of the best parts of any Fugazi show. He's incredible at replicating the intricate rhythms of the songs as they were laid down on the albums, and then taking them a step further while making them twice as good. If that makes sense.

So yes, he's an insane drummer. He always seemed like he was a really nice guy, too, and managed to smile more than the other members of the group, all while beating the shit out of his drums and ringing his bell.

"Birthday Pony" with Brendan assaulting the skins.
Posted by Wockenfuss at 4:14 AM

Ahh, one of the four drummers that taught me to drum. Not personally of course. When I was in middle school I taught myself to play drums by cranking up my Walkman and playing along with certain tapes that I had and drummers I liked. So I learned from Brendan Canty, Sara Lund of Unwound, Dave Triebwasser of Pond, and Smelly from NOFX. When I play drums now I could show you moves I stole from Canty. He, along with Lally, really are what make Fugazi stand out amongst other rock bands. Canty's technique is basic yet very different. Like I said, I still can't figure out what he's doing on "Repeater." I could go on and on. Great Stallion call.