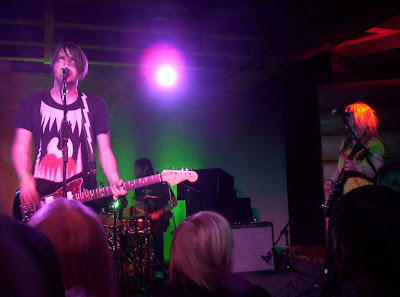 I guess I would consider The Von Bondies one of my guilty pleasures, but I've never been sure why I'm compelled to feel guilty about it. Maybe because they were a much-hyped band about five years ago, and it was then that I really got into to their major label debut, Pawn Shoppe Heart. They had been dubbed a Cool New Band, and I couldn't resist their charms. So maybe that's why I was reticent to admit my affections for these media darlings. I never cared for any of the other bands they were continually lumped in with (The Hives, The White Stripes, The Vines–all that "garage rock revival" bullshit), so I knew I wasn't drifting towards a bad place. I just really dug this one band.

The first time I heard "C'mon C'mon," I was driving home by myself in the middle of the night, and in a rare move, I had the radio on, tuned to the local "alternative rock" station. This has to be the only time in the last decade that I heard a song on the radio and actually wanted to know what it was. The fact that it was playing at four in the morning made me more hopeful that it was something promising, like it wasn't clicking with the daytime crowd and had been relegated to the edgier "after-hours" shows (yes, I'll cling to anything to avoid admitting that I like something popular, apparently). There was no DJ at that time of night, so I had to try and remember some lyrics to Google upon arriving at home. Turns out "Things were good when we were young" didn't really narrow things down too quickly, so I was quickly stalled.

I don't remember how I finally figured out it was the Von Bondies, but I did, and I picked up the record post-haste. Thankfully, the rest of the record was almost as good as that near-perfect single. I've listened to it a lot over the past five years, but never made a point to really keep up with the band, and didn't hear anything. While looking up a different show at the Doug Fir a few months back, I noticed they were coming to town. Then they showed up on Letterman a few weeks ago, with a few new members and a nice new song. I came across their new LP last week, picked it up, liked it, and decided to go to the show.

So, yeah, I did. And it was great. MySpace whores Nico Vega opened, and I didn't hate them as much as I thought I would. In fact, I really liked the set until their last song, which was terrible. But they were fun to watch, despite the posturing and the eye makeup.

The crowd wasn't big, and I began to wonder if the Von Bondies took too much time off, and are now in the position of having to rebuild their fanbase. They didn't seem to care, and after some minor technical difficulties during their first few songs and some awkward banter from the girls in the band, they got down to barreling through a good amount of music. They played "Pale Bride" (terrible name, great song), the single off the new record, early in the set, and with that out of the way they delved into a random smattering of old and new, mixing up the set really well. 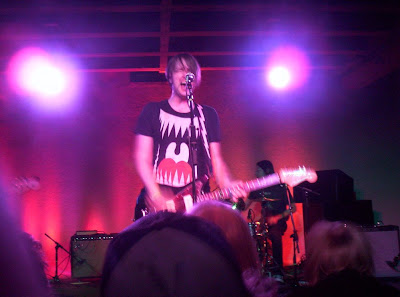 Lead dude Jason Stollsteimer is an awkward goofball, and his attempts to talk to the drunk crowd didn't go over too well. But, he seemed happy to be there, and went as far as to take some requests from the rum-soaked fat dudes who wouldn't pipe down. They played "C'mon C'mon" last, and while people seemed excited to hear it, it wasn't like they were waiting for it, and that made me happy for some reason. They left after that, but came back and did two more songs before calling it a night.

I bought the "Pale Bride" 7" (yellow vinyl and a non-album bonus track) from the bass player, who had to rush out from backstage, and we called it a night.
Posted by Wockenfuss at 3:02 AM