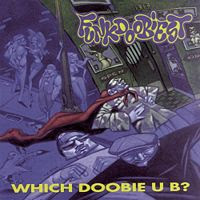 I'm fairly certain the first time I heard Sun Doobie (the Vocal Avenger) was on "Conspiracy of Silence," one of my favorite cuts from Paris's Sleeping With the Enemy LP. I had no idea who the dude was, but I knew I liked his voice. He showed up again on House of Pain's debut, and I soon figured out that he was from Funkdoobiest, the third group in the Soul Assassins collective (House of Pain and Cypress Hill being the other two).

I was really down with the House and the Hill, and I was ready for the Funkdoobiest album, which was rumored to be dropping "soon" for quite a while. They may have waited a bit too long (for my tastes, at least), because I remember liking this album quite a bit, but never giving it as much play as I had the House of Pain and Cypress Hill debuts. They were certainly down with the patented Soul Assassins formula though. Here's how it worked: There was one main rapper, one hype man/secondary rapper (though he never rapped as much as the main rapper, and he had to have a voice that was the exact opposite of the main rapper), and a DJ/producer (though Muggs pretty much produced for all of 'em). Here, I made a chart: 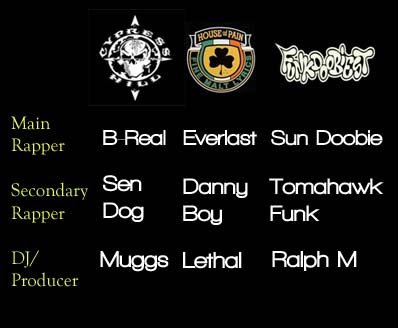 Yep, it's official: I have too much time on my hands.

On this record, he definitely makes it known he likes the ladies, but it doesn't get over the top until the next one. The beats on this record are great for the most part, and if I'm in the right mood, I can still get into it.

"The Funkiest"
Posted by Wockenfuss at 2:31 AM

I remember liking this but always wanting to like it more. I loved their first video and nothing else on the record seemed to be that good to me. Son Doobie has one of the best voices ever. Nice breakdown of the Soul Assassin formula.