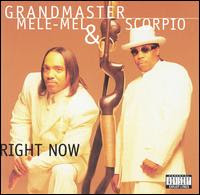 I've been racking my brain, trying to recall why in the hell I ever would have purchased this CD. I have a vague recollection of buying it, but I have a clearer memory of getting it home, putting it on, realizing my air-brained mistake, and thinking, why would I have even considered the possibility that this would be good? I'm pretty sure I paid a dollar for it, so that makes it a little less painful, I suppose. But still. A real flub on my part. It wasn't the first, and it won't be the last. I've been known to get caught up in the moment.

Here's the deal with this CD, and these are the same reasons it's terrible: First off, these two old school guys decided to go gangsta. Big mistake. If they would have turned on some late-70's charm, thrown it into disco party mode, and stayed somewhat true to their roots, they may have had something. Instead, within the first minute, Mele-Mel kicks out "She mad 'cause I came with my dick in her mouth." Not what you want to hear from the dude who used to hang with the Furious Five. You can't fault the dude for trying to update his sound, but come on. The chances of Mele-Mel (or "Melle Mel," as he was usually known) crossing over to gangsta rap were zip. Didn't we learn anything from The Funky Headhunter?

The other reason this album was destined to fail, and this is one of my all-time biggest pet peeves, is that they put awfully staged 30-second "interview" clips between every song. If you can't see how that would kill the flow of an album, you're either too egomaniacal to listen to listen to reason, or you're just not good at making music. I have to assume it's the former in this case, because the beats and hooks on this record aren't completely terrible.

But I don't think anyone was ever going to be ready for these two guys to come out with songs like "Broke Ass Niggas" and "Stupid Mutha Fuckas."