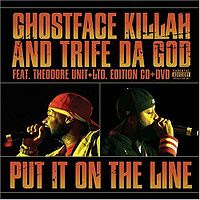 I just got this CD a few months back, and the more I listen to it, the more I wonder why I don't invest in more of these mixtape-type discs. While this is a legit release (Ghost released under his Stark Enterprises umbrella), all the signs of label interference or ploys to get airplay are nonexistent. Honestly, this is some of the hardest rap I've ever heard from Ghostface, and Trife's fuck-all attitude is a perfect match for both Ghost and the streetwise beats.

In the end, this is as much a Trife album as it is a Ghostface one, with Ghost appearing on ten of the eighteen tracks and Trife appearing on thirteen. Trife makes a case for being a headliner, continuing where his steady stream of guest spots left off. He doesn't have the distinct voice of say, Street Life, but he's clearly been the star of the Theodore Unit clique, as far as I can tell. Speaking of those dudes, they show up all over this one as well, with a few cuts leaving Ghost out and becoming full on T-Unit joints.

I'm still having a hard time handling Shawn Wigs, and his presence on "Out Da Way" is only saved by Ghost, a solid beat, and a short running time. He shows up again on "Late Night Arrival" with Ghost and Trife, and gets supremely outclassed. Sun God (Ghost's son) kicks a verse on the unfortunately titled "Man Up" after Trife and his pops, and the kid holds his own, though he may have been wiser to go first.

The bonus tracks that close out the album are the icing on the cake on this one, starting with Raekwon teaming with Ghost over a dope old school beat for "The Watch." They do some back-and-forth shit that is both funny and awesome. On "Ghost & Giancana," Kool G Rap and Ghost each kick a verse over a ragged beat that is bizarrely sweet, with Ghost declaring that he "bathes in the tub with guns." And G Rap continues to be one of the most underrated rappers in history. The disc closes with "The Sun," a cutesy song that sounds like a lullaby until Ghost cuts through it with "The sun could never be pussy." Raekwon and Slick Rick kick verses, and an uncredited RZA shows up at the end for a late hook. It's some cool shit.

In fact, this whole disc is some cool shit. And, it comes with a live DVD. Seriously, I gotta get some more of these.