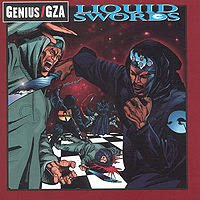 Did somebody yell "Wu-Tang!"?

So, I guess we covered a few of the Cappadonna solo records, but I think this is the first album by one of the "original" members of the Clan that I've gotten to so far. Cappa's joints were a nice place to warm up, and this is a great one to dive into proper. Everyone's got their favorite Wu-Tang solo-dolo records, and I'm never surprised when somebody tells me this is the one that tops their list. I wouldn't call it my favorite (I'll leave you guessing as to which one holds my top spot until we get to it), but I can't argue with anyone who says this is as good as it got.

1995 was a huge year for the Wu solo albums, with Ol' Dirty Bastard, Raekwon, and GZA all releasing records. (Technically, this is GZA's sophomore release, following the pre-Clan Words from the Genius.) It seemed they could do no wrong. Method Man's Tical had started the train towards the end of '94, and though some people (including Meth himself) felt it wasn't a strong record, they were wrong. ODB and Raekwon's releases fanned the flames, delivering songs that seemed untouchable. Each record, while holding true to the Clan mentality, had its own distinct feel and approach, and everybody knew GZA's wouldn't be any different. And on some level, we all knew it was going to be deep. But I'm not sure if anyone thought it was going to be this deep.

If you've never understood why people are/were fanatical about the Wu-Tang Clan, then you've probably never really listened to this album. This was something different, something that was smarter, cooler, and just plain better than anything being released by anyone not affiliated with the Wu. Meth was about stoned hijinks and loose wordplay, ODB was just fucking nuts, and Raekwon was playing Tony Montana like no one had before. GZA cut through it all with a brand of sobering precision that made everyone take a step back, strap the headphones on, and study the shit out of it. I still wonder how many rappers simply gave up after hearing the opening cut on this album. They must have known it was over.

While this is, like all the other early Clan solo records, a Wu-Tang collaborative effort, RZA and GZA are clearly at the reigns. GZA doesn't seem to have a faulty lyric on the whole damn thing, and it makes his fellow Wu member step their game up as well. And there's something about the staccato strings and slow bubbling beats on this that just wouldn't have worked as well on any of the other Clan member's records. This is the brilliance of the RZA. This is why people like myself became obsessed with this group. We couldn't believe that these guys had all found each other and they were this good.

I've only seen music truly change a few times in my life, and in the mid-90's, the Wu-Tang Clan changed hip hop. This record is one of the biggest reasons why. It added balance to the group dynamic, and proved that the Genius not only lived up to his name, but was, like they say, on some "other level" shit.

It's almost 15 years later and people are still deciphering the wordplay on this album, and it still sounds as good as it did in '95. Oh, I could talk about the glory days of the Wu-Tang Clan forever.

"I Gotcha Back"
Posted by Wockenfuss at 2:59 AM

Yeah, the song "Liquid Swords" is pretty untouchable. I am one of those obsessives you talked about, and this album hit at the height of my obsession. This was back when the lesser members were still somewhat mysterious (Masta Killa & U-God) and I was stoked that they were on this. I rocked this insanely hard for quite a long time and know every song like I created them myself. Even now I always crank up "4th Chamber," Duel Of The Iron Mics," Investigative Reports," "Liquid Swords," and just about every other song on here. "4th Chamber" especially is one of my all-time favorite songs by the Clan. It is one of the few perfect rap songs, in my opinion, that has ever been created. It has an insane, up tempo beat, no chorus, and four of the best rappers in the game who bring four of their best verses. Ghostface's verse especially almost brings tears to my eyes. The sky blue Bally kid indeed. I also love how Method Man is on about 4 songs, uncredited, just helping on choruses or back ups. This was back when they were still united and focused on being the best. I miss those days. "Weak like clock radio speakers" has always been one of my favorite similies.